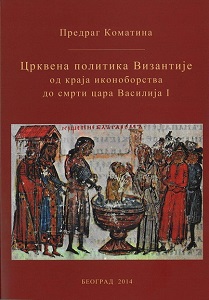 Author(s): Predrag Komatina
Subject(s): History, Political history, Social history, Theology and Religion, History of Religion
Published by: Vizantološki institut SANU
Summary/Abstract: The Iconoclast era of Byzantine history ended with the death of Emperor Theophilus on January 20th, 842. His wife Theodora, who took power in the name of their young son Michael III, devoted to Orthodoxy even during Theophilus’ life- -time, immediately began preparing the ground for the restoration of the veneration of icons. With this aim, she first held counsel with her associates in the state leadership – the Logothete Theoctistus, Sergius Nicetiates and her brothers Bardas and Petronas. At that meeting of the state leadership, the decision was made to renew the cult of icons, and the Empress released from imprisonment and persecution all monks, priests, bishops and lay people who had been persecuted for their veneration of icons. Next she convened the Council in Constantinople where the icon veneration would again be declared the official dogma of the church. The Council was held in early March 843. Participants included representatives of state authorities, priest and monks from the Constantinopolitan and provincial monasteries. The monks of the Capital were led by Hilarion of the Dalmatou, and a major figure among provincial monks was Simeon Stylite the Younger. The spiritual patron of them all was the famous ascetic Joannicius. Only the Studites represented a particular fraction. At the Council a valid Definition of faith was read and proclaimed, that is, the Horos of the Seventh Ecumenical Council of Nicaea 787, which had restored the veneration of icons after the first iconoclast period. The Council of 843 merely recalled the decisions of the Iconoclast Council of 815, and restored the decisions of the Council of 787. At the same Council the iconoclast Patriarch of Constantinople John VII the Grammarian was ousted, and the monk Methodius, a candidate of the provincial monks who also was in the Empress’s favor was chosen for the patriarchal throne. After his election, the people gathered spontaneously in front of St. Sophia and, led by the monks, conducted a procession that carried the icon of the Virgin and the Christ Child to the Bronze gates. This was a symbolic act, since the absence of Icon of Christ from the Gate had symbolized the supremacy of iconoclasm. This spontaneous procession was the forerunner of the later Procession of Orthodoxy. That day, which was the Sunday of the first week of Lent and which fell that year on March 11th, became known as the Sunday of Orthodoxy.

Osnivanje Patraske i Atinske mitropolije i Sloveni na Peloponezu The Establishment Of The Metropolis Of Patras And Of Athens And The Slavs In The Peloponnesus 2009 SLOVENI SREDNJEG PODUNAVLJA I BUGARSKA EKSPANZIJA U PRVOJ POLOVINI IX VEKA THE SLAVS OF THE MID-DANUBE BASIN AND THE BULGARIAN EXPANSION IN THE FIRST HALF OF THE 9TH CENTURY 2010 Византијска титула Константина Бодина The Byzantine Title Of Constantine Bodin 2011 Србија и Дукља у делу Јована Скилице Serbia and Dioclea in the work of John Skylitzes 2012 Идентитет Дукљана према De administrando imperio The identity of Diocletians according to the De administrando imperio 2014
2022 © CEEOL. ALL Rights Reserved. Privacy Policy | Terms & Conditions of use
ICB - InterConsult Bulgaria ver.1.7.2509