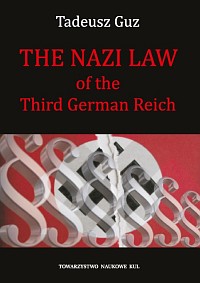 Author(s): Tadeusz Guz
Subject(s): History, Law, Constitution, Jurisprudence, History of Law, History of ideas, Recent History (1900 till today), Interwar Period (1920 - 1939), WW II and following years (1940 - 1949), Fascism, Nazism and WW II, Philosophy of Law
Published by: Towarzystwo Naukowe Katolickiego Uniwersytetu Lubelskiego Jana Pawła II
Keywords: Nazi law; Third German Reich; World War II
Summary/Abstract: Although over seventy years have passed since the end of World War II, the issue of national socialism in the German Third Reich still remains the subject of scientific studies of a lot of scientists [...] and an enormous ideological challenge [...] in the process of the creation of culture fit for man as a spiritual and physical being, their natural and legal communities and – not infrequently – [...] fit for the personal Absolute. [...] A certain, maybe the shortest synthesis of the problems brought up in this thesis of the philosophy of law of the Third Reich was made – in cooperation with many Nazi scientists and politicians – by the minister of the Reich Hans Frank in the publication edited by him in 1937 Deutsches Verwaltungsrecht [...] where Justus Danckwerts states the following: “Therefore, it is the state and not the nation that stands at the beginning of analysis. The Führer is the representative of the nation. The nation acts through him. He is the highest war commander, politician, law maker, judge and administrator. Under no circumstances is he bound. Law stands above him which has been growing in the nation and has been tested in the fight of the most German members of the nation in the world of enemies and that is the reason why it is far stronger than any act of law and what is timeless. This law is the socialist national view of the world. It [meaning this view] created the deepest and the most certain foundation of the life order of the German nation. It is the fundamental law of the nation, the unwritten constitution which determines all desire and all activity, not only of the members of the German nation itself but of each person in general.” [...] It is here that, according to Rudolf Bechert, the seeming “necessity of socialism” has its reason for the systematic shaping and interpretation of law. From the Introduction