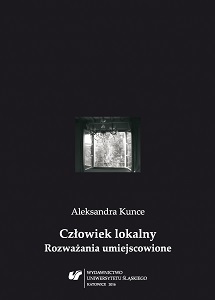 Author(s): Aleksandra Kunce
Subject(s): Anthropology, Studies of Literature, Comparative Study of Literature, Cultural Anthropology / Ethnology, Culture and social structure , Theory of Literature
Published by: Wydawnictwo Uniwersytetu Śląskiego
Keywords: locality; place; anthropology; oikology; house
Summary/Abstract: The following considerations derive from listening intently to the connection between man and a place, which could be somewhat loftily called a good act of serfdom, service (in) to a place. Under examination here is local man, and along with him, a cultural experience which holds hidden in itself the philosophy of locality and a tale about a place. What would the idea of locality be? Can one travel without an idea of home? Does local man have the power to create the world? These and other questions accompany reflections on man situated in a place. The sense of crisis in situating oneself in a place and not going through the idea of the process of settling in through experience directs us towards affirmation of locality and local man. The hope for recognition of the intricate connections between man and a place is also a developing hope for extracting the idea of locality from a simplified picture of what is familiar, archaic, monolithic and closed. The transformation in thinking about locality and local man is dictated by the hope to “ease up on” the aggressive contemporary elevation of the uprooting, mobility and a global route of culture. Behind affirmation, as a gesture confirming the significance of the situating of man in a place, lies the hope for overcoming the mythicized separation of nomadic man from settled man. A place, with its accumulated density of experiences, intertwines what is uprooted and outgoing with what is attached and settled. Affirmation of locality, however, is not an apology of a harmonious arrangement of a home, aim, community, sense of familiarity and clarity of cognition. The experience of locality leads to a “profound thought”, that is a though definitely radical, in the spirit of Nietzsche. It comprises an experience of both chasms and power that makes one “shiver inside”. The philosophy of locality exposes man to a place, confronts him/her with a place and compels him/her to fill the place with meaning and commitment. Man situated in a place is man bound to take up his/her place and live in this place creatively, without any support from the inherited thoughtless repertoire of tools for adaptation. The interpretation of local man is written in eight essays and is richly illustrated. In the first essay “W stronę afirmacji lokalności. Wprowadzenie”, the philosophy of locality is unfolding as a profound and affirmative thought, which would clarify the road of man according to the teaching of a place. The place is what we are waiting for and what finds us. The second essay “Człowiek lokalny i moc tworzenia świata” derives from the willingness to seek creative power in what is seemingly sluggish, stagnant and separate. Local man is revealed in his/her power to create connection with the world, in a binding tale about a place. Then, the next essay “Sprawiedliwi. Punkty doświadczeń” seeks to support the developed idea of locality in snapshots of old people photographed in different squares of the world. It directs us to the connections between locality, old age and the idea of the just. “Metropolis, lokalność i brak metafizyczny” connects the thinking about the city with the thinking about metaphysical community, home and locality, which leads to the description of cultural practices in Paris and Barcelona, but also to pondering about a local metropolis. The fifth essay „Lokalne rzeczy to światowe rzeczy. Śląskie miejsce” introduces us into the thinking about local space as world space because it is in a place that one begins to decide about oneself as an individual and as community man – local man is Jedermann. Silesian Görlitz, with an experience of wandering and stories of those who lost their homes, allows to consider locality in the proximity of home and wandering. In the essay “To, co na uboczu. Po co na Śląsku chodzi się do upadłych parków?”, the author addresses the experience of being, developed by local man, which is formulated right on the sidelines of life. The discussion focuses on a desolate landscape construction of the former Silesian park Fazaniec. The essay „Kruche i lokalne. Narracja o granicy kulturowej a świat więzi”, by focusing on a Barcelonian project of Centre de Cultura Contemporània de Barcelona CCCB, introduces an isssue of dialectics of oppression and protection of a boundary. The considerations lead to a question about where to find new ways of narration about a boundary, in which an intellectual gesture becomes an ethical gesture at the same time. The last essay „O lękach wobec gestu nieprzebaczenia. Radykalna lokalizacja myślenia o człowieku” derives from the will to look in locality for a barrier to a thoughtless and noncommittal act. The radicalization of individual responsibility, acknowledgement of a local dimension of a person, quieting of collective gravitation – this is knowledge brought about by a recognition of anxieties in the space of (non)forgiveness. Local space situates us in a point of experiences making us responsible for a gesture situated in a place, materialized word and tangible movement. Considerations on man situated in a place lead to the unfolding idea of locality in which, like in an immense thought, we find anew the proximity with the things being the farthest because they are the nearest.