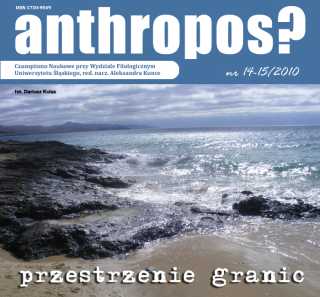 Czy narracja o granicy kulturowej może zmieniać świat więzi?
Can the narration about the border may change the world?

Summary/Abstract: The Essay makes a reflection about limits in the anthropological way of thinking. The Author has tried to outline and systemize this problem. Thinking about limits of culture limits, behavior limits, thinking of ethnic limits and organize space - was one of the basic pieces of reflection for the anthropologists. As the author has convinced, this is also a key for the humanistic research: borders species, borders language, borders disputes, movement and of dilution borders, understanding borders, but also more synthesis as limits of human or ethics. From the first volume, author makes a questions - As far as today's the border is vital form, which would be able give rise discussion? Whether you can still bring something new to the description borders? At once, author motivates, the presence in narrative cultural borders was obvious. In the case, when we can not notice borders in anthropological science, it could not exist a construct of the picture around the world as separate cultures, moreover - border from each other, located in a certain distance. The World of cultures was therefore seen as delimited structural organizations, which were united a universal logical human structure mind. The Anthropology has worked for the autonomy, which reminds mythological system - where we can find aspects such as cultures hierarchy, distinctness; it has also built different kind of typologies, point maps, tribes and even nations. This reflections constitute very important issue - anthropological picture lied down foreign border, such as: colonial division, indicating the importance empowering the tribal borders, which were held across the political world organization, but also reinforce the anthropological view in borders tract. In fact, it cannot be anthropology blame on creation and strengthening border, because anthropology surely not prepare them, if they were not in the cultural reality. At the heart of the freedom is a continuing need for human, to separate from that of other, to depart from foreign and noted that in this area is necessary to protect what belong to strengthen territorial authority. The Main issue shows, that it is possible wonder, as well as Barth wrote - whether or not limit shall enter in place of their differences and identity or only it produces. May each limit is "into"? but, as the author has assured - imperative of separation is present.