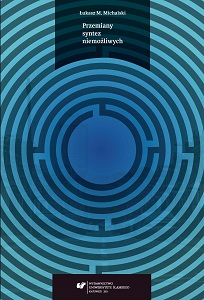 Author(s): Łukasz M. Michalski
Subject(s): History, Philosophy, Social Sciences, Language and Literature Studies, Education, Cultural history, Social Philosophy, Comparative history, History of ideas, Social history, Theory of Literature
Published by: Wydawnictwo Uniwersytetu Śląskiego
Keywords: textbook; history of upbringing; metahistory; narratology; pedagogics; philosophy of education; Hayden Whitel; Barbara Skarga
Summary/Abstract: The work entitled “The transformations of impossible syntheses. A study on the textbook historiography of upbringing” investigates the intricacies of narrating contemporary historio-educational syntheses applied in academic education. The research strategy adopted in the present work implicates the assumptions of the metahistory of upbringing as well as the hermeneutic conceptualization of a text, which allows to perform the analyses both in the diachronic and in the synchronic context. Three main objectives of the research lead from the characteristics of textbook narration within the history of upbringing, through the outline of its transformations, up to the confrontation with what happened in the last century within the theory of historiography (especially in the context of the so-called ethical turn). The final research objective, which boils down to demonstrating the history of the historiography of upbringing against the background of humanistic “turns” oft-manifested in the theory of historiography, has also become a chance to find the areas hitherto untapped and potentially inspiring for the research conducted within the history of upbringing, but also for the consideration of the paradigmatic identity of the field itself. The opening perspective of the present study emphasizes the significance of the narrational dimension of academic textbooks, and therefore leads to looking upon such texts as not only the syntheses of facts from the past, but also as works characterized by a specific way of naming the educational phenomena that they describe, a network of concepts, an argumentative style or an axiological layer. For the sake of their conceptualization, the vision of text formulated in the book entitled “Granice historyczności” by Barbara Skarga has been adopted in the present work. This idea presupposes the existence of four “layers” in which the meaning of the content is effectuated – these are as follows: subject matter, categories, sense rules, and episteme. Each of the textbooks analysed in the present work is described in accordance with the classification outlined in this way. A broader investigation has been required especially in the case of the sense rules effectuated in historio-educational syntheses, for whose conceptualization a tropological vision of historiography formulated by Hayden White has been additionally adopted.Investigating the characteristics of individual textbooks has allowed to outline the paths of progress for this type of academic writing, originating in the mid-war period (the first of the textbooks analysed was published in 1934) and continuing to the most recent times (the last synthesis came out in the year 2012), and at the same time it allows to see how the narration has (or has not) historically changed at each of the four levels of content, and to what extent it is compatible with the transformations of the contemporary theory of historiography. As a whole, the disquisition emphasizes the indispensability of narratively conscious dealing with the history of upbringing as a basis for humanistic accent of the pedagogy itself.