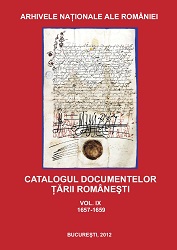 Author(s): Mirela Comănescu, Laura Niculescu, Ileana Dincă
Contributor(s): Elena Mușat (Editor)
Subject(s): History, Political history, 17th Century
Published by: Arhivele Nationale ale Romaniei
Keywords: Romania; Wallachia; national archives;
Summary/Abstract: The IXth volume of the Catalog of Documents of Wallachia includes the summaries of a number of 847 acts concerning the years 1657-1659, of which 583 are originals (561 in Romanian, 18 in Slavonic, 3 in Hungarian and 1 in Greek) . As for the support of the documents used, of the 583 original documents, 24 are written on parchment, while the rest are written on paper. The documents are found in Romania, in the fonds and collections of the Directorate of Central Historical Archives and in the departmental archives of Bistriţa-Năsăud, Braşov, Dolj, Gorj, Prahova and Vâlcea. The collection also includes 4 microfilmed documents and a photocopy identified in the Foreign Archives. The working method was similar to that used for the previous volume. The documents included in this volume contain information that reflects the development of Wallachia in the middle of the 17th century, the end of the reign of Constantine Şerban, the reign of Mihnea the 3rd Radu and the beginning of the reign of Grigorie Ghica. The stories speak of different social categories, their relations and various economic activities: agriculture (the main occupation of the inhabitants of the country), apple growing, viticulture, livestock breeding, beekeeping, trade. We also find information on the functioning of feudal institutions: legal activity, military organization, taxation. There are also many documents that highlight the concern of the voivodes for granting different privileges to monasteries. The collection highlights many documents that highlight the economic and diplomatic ties of Wallachia with Transylvania (especially with Prince Gheorghe Rakóczi and the city of Braşov). It should be noted the continuation of the process of consolidation of the Rumanian writing in spite of Slavonic and the diffusion of this one. This is a reality demonstrated by the large number of acts issued in Wallachia, 14 written in Romanian, also written in chancelleries only by private persons. The book could also arouse the interest of specialists in the fields of the auxiliary sciences of history thanks to the sigillographic, genealogical details, to those preoccupied by the art of the miniature and the watermark, the diplomatic, the onomastic, the toponymy contained in the documents.