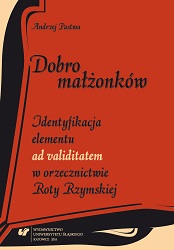 Author(s): Andrzej Pastwa
Subject(s): Christian Theology and Religion, Philosophy, Law, Constitution, Jurisprudence, Philosophical Traditions, Theology and Religion, Comparative Studies of Religion, Hermeneutics, Canon Law / Church Law
Published by: Wydawnictwo Uniwersytetu Śląskiego
Keywords: bonum coniugum; hermeneutics; canonic law; marriage; The Second Vatican Council
Summary/Abstract: “The clarification of […] the bonum coniugum exclusion hypotheses must be carefully studied by the jurisprudence of the Roman Rota” said Benedict XVI in 2011, referring indirectly to the diagnosis of the dean of the Roman Rota, Mario Francesco Pompedda, who stated in 1998 that the legal content of the clause of “the good of the spouses” constitutes one of the most crucial hermeneutic issues, which calls for more in-depth research. Now more than ever, the Pope’s memento appears akin to a compass designed to guide the service of the Apostolic Tribunal, one which makes it possible to determine clear judicial standards in the identification of the said element ad validitatem. Service, it is worth to add, which requires integrity and professionalism since, when it comes to the fundamental issues included in the sphere designated by the 2013 Rota allocution “Marriage and the relationship between faith and the natural order” (which, predictably, is where Benedict XVI situates the issue of “clarifying the essential element of bonum coniugum”), the words of John Paul II, who said that “legal hermeneutics requires […] a vision which encompasses the whole body of the Church’s teachings,” appear to become even more significant. // In such an obvious way John Paul II and Benedict XVI — titans of spirit and intellect, caryphaeuses of humanism, measured with a simultaneous engagement in fides et ratio—refer to the potential of science. It is, thus, difficult to ignore the invitation expressed in those words—which also highlights the role of the creators of the Rota jurisprudence, “the exemplary juridical wisdom”—for the canon law experts searching for the truth de matrimonio in theoretical research. Indeed, the papal thought—bolstered by the severity of the problem, i.e. the risk of proliferation of erroneous interpretations of ordinato ad bonum coniugum (“the danger that threatens the correct application of the norms on incapacity [and exclusions], […] and to transform the simple shortcomings of the spouses in their conjugal existence into impediment”), particularly in the lower tribunals—calls for serious consideration. This, in turn, constitutes an important challenge for the scholars, as well as the judges of the Roman Rota, to transform (in the spirit of paradigmatic harmonization vetera et nova) personalistic ideas, grounded in tradition and conciliar magisterium, into legal praxis. Therefore, the following attempt of a scholarly approach to the title identification of the ad validitatem element in the Roman Rota jurisprudence is predominantly inscribed into the doctrinal and judicial context delineated above. // The methodical ordering of the variety of judicial stances, valorizing the bonum coniugum formula, has been facilitated by the process of distinguishing, within the broad research area, particular premises: genetic and historical as well as epistemological and methodological, which resulted in the formulation of research hypotheses, formulated in the conclusions of the first part of the monograph and then verified (it could be said: successfully) in the following parts. // Regarding the hypotheses, it should be noted that there exists a documented fact (included in hypothesis II-2), which proves that a special Papal magisterium, included in his speeches addressed to the Roman Rota, authorizes an optimal methodology of the judicial approach towards essentialia in matrimonio, which consists in leading the discourse along the axis: anthropological realism—judicial realism. Search query of all published (as well as unpublished) sentences pronounced by the Rota, which highlight the bonum coniugum formula to a greater or lesser extent, consciously directed toward the analysis of the two aforementioned surfaces: anthropological and stricte legal, confirmed the validity of that perspective. Thus, it demonstrated that a sine qua non condition for an appropriate selection (according to hypothesis II-3) of consistent jurisprudence with regard to bonum coniugum—both in “non-autonomous” as well as “autonomous” configurations—is the affirmation of the paradigm of the “realism” of the new matrimonial doctrine. // The conclusions, presented as a summarizing comparison between the paradigmatic depictions of bonum coniugum: (I) depictions which appear to have been an instrument of the past (the good of the spouses understood exclusively in nonautonomous configurations); (II) depictions which are open to further developments (the good of the spouses understood in autonomous configurations)—must remain open to discussion, for a lack of a better option. This particular scholarly approach: that of a constant search for the “signs of times,” is grounded in the teachings of Benedict XVI (see: hypothesis II-1) when he says, “Cases in which there is failure to recognize the other as spouse or in which the essential ordering of the community of conjugal life to the good of the other is excluded are [today – A.P.] quite exceptional. The clarification of these hypotheses of exclusion of the bonum coniugum must be attentively assessed by the jurisprudence of the Roman Rota.”