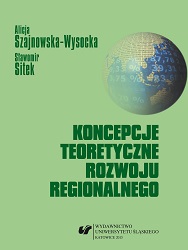 Author(s): Alicja Szajnowska-Wysocka, Sławomir Sitek
Subject(s): Geography, Regional studies, Regional Geography
Published by: Wydawnictwo Uniwersytetu Śląskiego
Keywords: theoretical concepts;regional development;
Summary/Abstract: We have endeavoured to ensure that the structure of this monograph is logical and consistent, therefore it has been comprised into five chapters: The first chapter is of a terminological character and comprises deliberations about the concept of development, which – owing to the fact that it is difficult to define, is formulated equivocally. In general terms, development is a process of metamorphosis, change, transformation to more complex or finer states or forms. However, in social and economic sciences, it is formulated in various ways. Currently, the narrow, techno-economic approach to development is being abandoned, as it ignored the cultural background and considered the growing gross domestic product as the measure of success. This was conducive to the creation of many ideas, concepts, theories and visions. Theories of development point to the diversity of possibilities of economic growth, and explain mechanisms for arising of disparities between countries. They are related to the dichotomy between development and underdevelopment. Theories of modernisation (internal factors are decisive, development is both endogenous and phaseal, as well as linear and isomorphic) constitute a distinct group of explanatory theories. The criticism of the theories of modernisation resulted in the appearance of concepts of dependent development. Their supporters (‘dependists’) treat development as an evolutionary process (however non-pheasal), which is multilinear and dependent on social transformations. Moreover, methods for analysing and measuring the development have been reviewed. The complexity of the phenomenon means that there is no single, universally accepted standard of research. The procedures have been grouped into four main blocks, comprising the following methods: statistical, spatial analysis, strategic research and social research. Subsequently, selected measures of development have been presented, along with their advantages and disadvantages. The availability of statistic data required in the process of empirical evaluation of regional development have been also considered. This knowledge enables assessing the practical possibility for employing methods that are appropriate because of the availability of the information. The second chapter presents development in the light of globalisation, which reorganises the political, social and economic space. In result, it becomes the cause and, at the same time, the effect of broader transformations in all spheres of human activity (an increase of transplanetary suprateritorial links). Globalisation is an extremely ambiguous and difficult to define concept, nevertheless, defining it is absolutely essential. Four main definitions have been introduced, under which globalisation is presented as: 1) internationalisation, 2) liberalisation, 3) universalisation, 4) Westernisation. J.A. Scholte (2006) suggests another, the fifth one: globalisation is the process of spreading transplanetary and (contemporary) suprateritorial social relationships, which are generally detached from the territory. Afterwords, the theoretical foundations of different explanations of globalisation have been presented (liberalism, political realism, Marxism, constructivism, postmodernism and feminism) and subsequent stages of its development have been characterised: 1) foretokens of globalisation, 2) the initial phase of globalisation, 3) the contemporary accelerated globalisation. The second chapter has been completed with shedding light on attitudes towards globalisation and its future. In the extensive third chapter, selected theoretical concepts of regional development have been presented in the following groups: 1) classical concepts: among others, the concept of the economic base, the theory of the basic product, the theory of growth poles, the centre-periphery model, concepts of innovation networks, the production cycle theory and the theory of clusters; 2) concepts of endogenous regional development. In the last decade of the twentieth century, concepts of alternative development appeared, which emphasised the importance of social progress, human capital and local communities and their alternativeness for regional development. They were a response to the shortcomings of classical theories of development. They create the possibility of supplementing them with such growth models in which not only infrastructure investment and production are considered as the internal resources, but also expenditure on science, research and development programs, education and economic policy of the government and local governments. The fourth chapter discusses the contemporary development processes, dominated by categories of sustainable and integrated development. The first of the categories, also known as permanent, self-sustaining development or eco-development, has become a constitutional principle of the functioning of the state. It is based on the assumption that the three components: community, environment and economy are treated equally. Increasingly popular are becoming pre-ecological views, which attach the greatest importance to nature. On the other hand, integrated development is a new philosophy of the approach to this phenomenon. It places emphasis on complex actions, which consist in combining spatial development with social and economic objectives. Such development is multidimensional, requiring consolidation and coordination treatments and strategic management. This model has holistic characteristics and involves systemic and institutional conditions for harmonisation of development processes. The last chapter deals with selected determinants and problems of regional and local development. Reference has been made to the condition of development in the border areas, which exhibit characteristics of outermost regions. Determinants which may constitute positive circumstances for development in the vicinity of the border have been indicated. Moreover, the possibility of shaping development processes in a situation of depopulation, and a real significance of innovation and competitiveness as the conditions for growth have been considered. The final section presents the importance of local systems and localisms for development processes. It emphasises the importance of local development, especially in the era of globalisation, pointing to its significant correlation with the place and the community that inhabit it. What is more, complementarity of local development in relation to regional and global processes has been demonstrated. The study has been complemented with an extensive, important for methodological and didactic reasons bibliography, which is the result of the comprehensive character of the review.