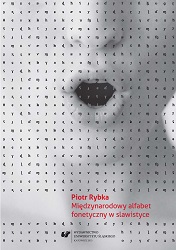 Author(s): Piotr Rybka
Subject(s): Language studies, Language and Literature Studies, Theoretical Linguistics, Applied Linguistics, Phonetics / Phonology, Western Slavic Languages, Eastern Slavic Languages, South Slavic Languages, Philology
Published by: Wydawnictwo Uniwersytetu Śląskiego
Keywords: International Phonetic Alphabet; IPA; phonetics; transcription; articulation; Slavic Studies
Summary/Abstract: The monograph is an extensive guide to international transcription. All currently used symbols of the International Phonetic Alphabet are incorporated along with the explanation of their meaning and uses. Among many examples of transcription derived from phonetic publications, original transcriptions of more difficult articulations are also included in the book. It may be noted, therefore, that the book bridges the gap in Polish linguistic literature where–for many years–a full description of present standard of international transcription has been missing. The examples of transcriptions and sets of symbols are gathered to meet the needs of Slavonic researchers. The present monograph may be, therefore, recognized as intended for scientific rather than general reader. It may prove useful to specialists in different linguistic fields as well as in speech therapy. The book might be used by students of various philological subjects provided that they have acquired the essentials of articulatory phonetics. The monograph comprises ten chapters along with the unpaginated preface and a list of phonetic symbols at the end. General assumptions of the study are introduced in the preface as well as possible uses of international transcription and reasons behind preferring this system of transcription to traditional Slavonic alphabet. The first chapter outlines the history of the International Phonetic Association and its alphabet since its beginnings in late 19th century until the latest changes in the 21st century. All currently used sets of international phonetic symbols with essential explanations are introduced in the second chapter. Understanding of the use of the symbols is facilitated by means of original typology of the symbols contained in this chapter. The third chapter depicts the so-called Principles of the International Phonetic Association defining the application of the alphabet, the evolution of its symbols, as well as basic rules of international transcription. The Principles are discussed according to the official handbook of the International Phonetic Association. In the following chapter, symbols of both Slavonic and International Phonetic Alphabets are compared, each group of equivalents being accompanied by essential explanatory notes. The list of symbols introduced in chapter four enables the reader to compare both alphabets and become familiarized with the major differences between them. Ways of transcribing different actions of the larynx (i.e. phonation) are presented in the fifth chapter, whose latter section consists of symbols which may be used to transcribe prosodic features of speech including tone, word stress, length, boundaries of prosodic units, intonation contours and many others. The most important consonant symbols arranged according to the place of articulation are discussed in the subsequent chapter, which begins with the description of the model of vocal organs with its divisions. More unusual articulations are introduced in the footnotes, since they may occur in Slavonic languages only as incorrect realizations of sounds. The main text, however, is centered around articulations that are most common in the above-mentioned languages. In the seventh chapter, vowel symbols are elaborated with reference to the vowel quadrilateral model which provides the basis of the international system of vowel transcription. This section contains the symbols of the most important central approximants as well as symbols of particular Slavonic vowels. Chapter eight includes review of symbols for essential complex articulations, such as palatalization, labialization, affricates, nasalization and diphthongs. In a separate section, transcription of different types of release–also called ‘plosion’ in some works–is presented along with types of consonant gemination. In the subsequent (ninth) chapter much space has been given to particular issues concerning phonetics of Slavonic languages. Transcription of coronal, palatal and palatalized consonants is discussed in great detail, the discussion being an attempt at organizing different transcriptions found in literature. The last chapter consists of additional examples of transcriptions of words and sentences in Czech, Polish, Russian and Slovenian languages. Due to sporadic application of the International Phonetic Alphabet to Slavonic languages, providing examples from other languages was not possible. Nevertheless, the transcriptions gathered allow to observe wide range of possibilities of the International Phonetic Alphabet which serves as a device for marking minute articulatory features. The list of references provides all publications used in the monograph as well as offers additional information on the International Phonetic Alphabet. All phonetic symbols and all complex symbols available in computer fonts are listed at the end of the book. Value description as well as Unicode number are provided for each symbol. Additional explanatory notes on structure and common erroneous substitutions of similar letters are given to most complex symbols. Many of the international symbols have their equivalents in simplified phonetic scripts which are also added to the closing list of symbols.