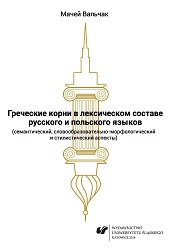 Author(s): Maciej Walczak
Subject(s): Language studies, Language and Literature Studies, Theoretical Linguistics, Applied Linguistics, Semantics, Comparative Linguistics, Western Slavic Languages, Eastern Slavic Languages
Published by: Wydawnictwo Uniwersytetu Śląskiego
Keywords: lexical units; Greek language; root morphemes; Polish-Russian studies
Summary/Abstract: The object of research in the following work are the autonomous lexical units (for instance: dramat, estetyka, technika, technologia, energia, energetyka, etc. with their derivatives) and the root morphemes borrowed from the Greek language (bio-, cyber-, eko-, ekono-, elektro-, and mega-) in the structure of selected parts of speech in Polish and Russian. The object of analysis are semantic, morphological-derivational and stylistic features of these parts of speech in the Polish-Russian confrontation. The choice of the research subject was dictated by the need to describe in detail a selected fragment of lexis of related languages with regard to the influence of foreign elements on their vocabulary, and furthermore, their evolution and expansion into other areas of the linguistic system. This choice is even more justified regarding the lack of specific Polish-Russian studies on the subject (with an emphasis on the most recent phenomena in both languages). The existing and quite extensive literature discussed in chapter one allows us to draw the conclusion that borrowings were first and foremost studied as lexical phenomena. These issues were also often analysed in terms of the word formation, morphology and adaptation processes of the foreign elements. The questions of borrowings in phraseology and dialectology have been described to a lesser extent. It should be noted that the borrowings from Greek constitute quite a large body in the lexis of the Russian language. Therefore, they have been more thoroughly and broadly reflected in Russian linguistic literature than in Polish. Moreover, different methods were applied for the analysis of the borrowings, as well as not always coinciding typologies and classifications. In chapter two of the following dissertation, we managed to discover, unlike analogical comparative studies, the potential conceptual mechanisms affecting the synonymy of the foreign morphemes (mega-, super, hiper- and ekstra-) not only with their native counterparts, but also with other evaluative phrases (mainly positive). It seems that we have also explained the question of collocations, in both languages, of the lexoid mega- with appropriate nouns (against the background of Greek). These collocations may stem from its two established main meanings vectorial and scalar, depending on whether it collocates with a concrete or abstract noun. The vectorial meaning is hereby understood as a feature related to space, that is as size oriented horizontally (length, width) and vertically (height), like mega bluza, mega kolczyki; мега сборник, мега карандаш. The scalar meaning, on the other hand, is interpreted as a feature manifesting itself through intensity (for example mega energia, mega masa, and mega moc). Furthermore, in this chapter, we have proposed a classification of lexemes with morphemes of our interest according to meaning (e.g. in different contexts, the adjective электронный / elektroniczny can be interpreted as: 1.‘Internet’; 2. ‘virtual’ – that is materially nonexistent; 3. ‘computer’; 4. ‘related to electronics’ – а) ‘a field of science’, b) ‘equipment’. In addition, semantic parallelisms have been indicated between the parts of speech containing the discussed morphemes and the lexemes regarded as their synonyms (e.g. экологичный / ekologiczny = зелёный / zielony) or antonyms (e.g. Polish eko- ≠ techno-).