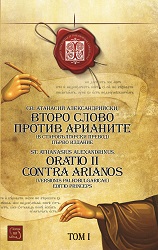 Author(s): st.Athanasius of Alexandria
Contributor(s): Pirinka Penkova (Composer)
Subject(s): Christian Theology and Religion, History, Philosophy, Language studies, Language and Literature Studies, Studies of Literature, Ethics / Practical Philosophy, Ethnohistory, History of ideas, Local History / Microhistory, Ancient World, Middle Ages, Theology and Religion, Bulgarian Literature, Greek Literature, South Slavic Languages
Published by: Издателство »Изток-Запад«
Keywords: history; theology;st. Athanasius of Alexandria; bilingual;
Summary/Abstract: The book contains the Old Bulgarian translation of Athanasius of Alexandria's The Second Oratio against the Arians composed by Konstantin of Preslav in 906. The copy prepared in Novgorod in 1489 is found in MS 968 of the Pogodin collection, St. Petersburg. The parallel Slavonic and Greek texts are provided with Slavonic and Greek readings, comments and index. The index of Oratio II is prepared by prof. Ivan Hristov, Sofia University.Some Glagolitic graphemes in the Cyrillic copy and the translations language confirms the Preslav origin of the protograph of MS 968. The script MS 968 contents short Life of Athanasius, the three authentic Orationes against the Arians, The Encyclical Letter to the Bishops of Egypt an Libya (as The Fourth Oratio) and The Epistle on Easter (as The Fifth Oratio). The Greek protograph of the Slavonic version queries a Greek manuscript, belonging to the so-called tradition x. The researcher claims, that Konstantins version of Oratio II is a subject of a sequentially Greek redaction towards a strict verbatim translation with expressions foreign to the Slavic grammar. A comparison between Oratio II and Oratio III in MS 968 proves, that the Oratio III has not been edited and preserved the feachers of a free translation from a Greek protograph, which had belonged to a mixed x and RSP-tradition. Closest to the Slavonic protograph is the Greek Manuscript Atheniensis gr. 428, X c., some readings are registred only in the manuscripts Patmiacus 4, X-XI c. and Patmiacus A3, XI c.The linguistic exegesis, developed by Athanasius in his comments to the Holy Scripture, was adopted and expanded by Constantine of Preslav to express the antonyms of 'constant, eternal divine substance' versus 'non-divine existence, limited in time and space'. Constantine of Preslav created a theological register and coined a special Slavonic doublets for each of the to dimensions - divine and not divine. He implemented the linguistic exegesis on morphological, syntactical and graphical level, too.A review of the unexplored works, attributed to Athanasius in the South Slavonic tradition, is included; it opens the perspective for further investigation.