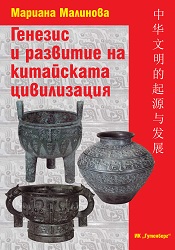 Author(s): Mariana Malinova Tien
Subject(s): History, Anthropology, Social Sciences, Archaeology, Cultural history, Geography, Regional studies, Historical Geography, Maps / Cartography, Sociology, Ethnohistory, Social history, Ancient World, Cultural Anthropology / Ethnology, Culture and social structure , Social development, Social differentiation, Sociology of Culture
Published by: Издателска къща "Гутенберг"
Keywords: Research; Chinese history; Chinese situating; Development of nations;
Summary/Abstract: Chinese civilization is one of the five great nations that were evident in the ancient human history. Even today Chinese civilization is perceived and described in the academic literature as a civilization that is creating, developing and administering the ideology (religio-philosophical) and the cultural orientation of their neighbor countries. The forming of the cultural areal in East Asia has begun after the discovery of the Chinese hieroglyphs around 1000 years B.C. The author of this monograph is not repeating the known about the history of the Chinese civilization but she rather goes into a topic that is less explored. The chronological range of her research is from 3000 years B.C. to 8th century B.C.; from the end of Neolithic era to the first items made of iron. This book is among the first Bulgarian monographs on Asian topic. It is written by a scholar that speaks Chinese fluently, has diplomas from three Chinese universities and that had specialized Chinese archaeology, Old Chinese history and Old Chinese language. One of the biggest problems before the author and here work with the old texts has been the fact that she had to separate myths from history, because in the East traditionally from myths mark the beginning of history. In this book is reviewed the specific terminology in Chinese archaeology, especially the terminology from the Bronze era and the ancient Chinese bronze. In the book there are pictures of many Chinese archaeological items, or graphics of such with information about their physical characteristics and locations where they have been found. This academic work has contributed to the Bulgarian science society and more directly - to the Bulgarian Asian studies.