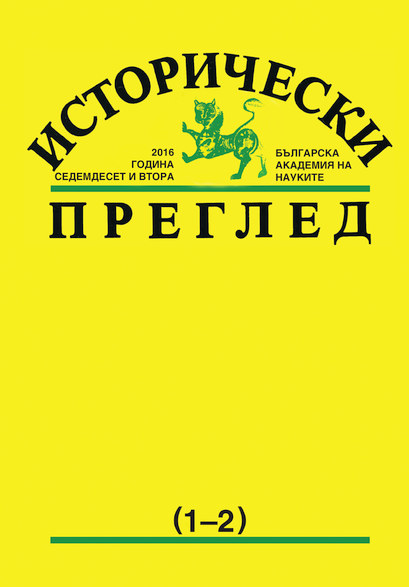 Summary/Abstract: The purpose of this article, which is informative and is of an over-viewing and analytical nature, is to mark the main stages in the spread of Bulgarian humanities in China from the creation of the PRC to the present day and to comment on the published scientific works in the field of Bulgarian history, including translation literature. The stages in the spread of Bulgarian humanities in China are traced chronologically, they roughly coincide with the separate periods in the development of the diplomatic relations between the two countries and predetermine the nature of the published materials. The change in the focus of Bulgarian history studies in the PRC, most of which have been published in the editions of the Institute of World History at the Chinese Academy of Social Sciences, is unfolded against the backdrop of the cultural and political specifics of different ages. Special attention is paid to the scientific, translational and expert activities of one of the best Chinese scholars and analysts on the Balkans – Professor Ma Sipu, who has the greatest merits in popularizing Bulgarian history, culture and political life, as well as in the establishment of the Bulgarian Language Department at the Beijing University for Foreign Languages. In the same context, the article examines the founders of Bulgarian studies in the PRC – the first Chinese Bulgarian scholars who received their education in Bulgaria in the 1950s and early 1960s (Yan Yendzi, Liu Jubai, Jing Pilian, Ma Sipu) as well as the fruitful scientific cooperation between the scholars studying Bulgarian history and the social and political phenomena in modern Bulgaria – Ma Sipu, Yuy Jiahu, Juan Lifu, Zhang Lienfan and others. The study presents Chinese scholars’ interpretations, opinions, analyzes and forecasts connected with Bulgarian historical facts and events against the backdrop of the common development of the Balkan region and often in the context of Eastern European and world development, the facts are accompanied with comparative references to Chinese history, which not only facilitates the perception of events and historical figures, but also supports future comparative research, both in Bulgaria and China.