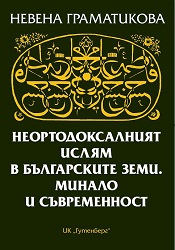 Author(s): Nevena Gramatikova
Subject(s): History, Ethnohistory, Social history, Middle Ages, Modern Age, Recent History (1900 till today), Special Historiographies:, Theology and Religion, Islam studies, Comparative Studies of Religion, Religion and science , 13th to 14th Centuries, 15th Century, 16th Century, 17th Century, 18th Century, 19th Century, The Ottoman Empire, History of Islam
Published by: Издателска къща "Гутенберг"
Keywords: Unorthodox Islam; Islam; Bulgaria; Balkan Islam;
Summary/Abstract: This book is among the few deep analysis on Islam in the Bulgarian lands, written by a Bulgarian author. The analysis covers the origin of Islam in the Bulgarian lands, it's spreading there and its relation to cult objects according to the Life of Demir Baba and Otman Baba. Studies, like this one, are very important for the polemic and uncertain times we live in, because they can help us understand better the culture of part of the population of our countries. We are witnessing conflicts on ethnic basis, caused by misunderstanding or disinformation on processes that were being formed for centuries. Understanding this culture is important not only to ourselves but to the person standing next to us, for respecting each other, despite of the religious differences. In this book the author made serious attempt to give an answer to a polemic academic topics related to the Alevi(Alevism), like their origin, their destiny and the parallels of their historical and cultural memory in the present.