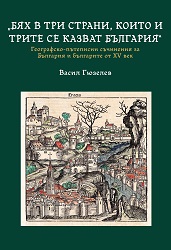 Author(s): Vasil Gyuzelev
Subject(s): History, Cultural history, Diplomatic history, Economic history, Ethnohistory, History of ideas, Local History / Microhistory, Military history, Political history, Social history, Middle Ages, 15th Century
Published by: Фондация "Българско историческо наследство"
Summary/Abstract: The present anthology comprises translations of 47 works (travel notes and log books, geography accounts, itineraries, portolans, treatises, sermons, novels and a variety of others); they are made up of either detailed or concise reports dealing with the Bulgarian lands and their inhabitants during the fifteenth century. They are the works of authors of various affiliations in terms of ethnicity, religious denomination or nationality (Arab, Bulgarian, Byzantine, French, German, Hungarian, Italian, Russian, Serbian, Spanish ones, etc.) They are meant to draw out an image of the state of affairs in the Bulgarian lands, as well as of the general state of the Bulgarians during the century in question, and also supplement and add up to the details listed in the papers and historical records pertinent to the period mentioned being of paramount importance in view to the Bulgarian history. They clearly and unequivocally show that during that period of time, the recollections over the Bulgarians and their nation had as of yet been clear and very much alive not only in the minds of many, but also distinct to almost all of Europe. Meanwhile, the details they feature provide for a clarification of the way of life of the Bulgarian people in the first few decades it had under the sway of a foreign rule, their part partaking not only to their history, but to the ones of the Balkans and Europe. The selected works of the remarkable medieval Bulgarian writers from that century, such as Constantine of Kostenets and Vladislav the Grammarian, stand out from the rest in the anthology. Their geographical and travel notes to a large extent account for the vigour of the Bulgarian national creative zest displayed in the course of a grievous century from the Bulgarian history. Brief notes on the certain authors and their works publications have been added to each and every translation of the particular sources. The written commentary with the particular texts is concise and relates a purposive information. A considerable portion of the texts comprised in the respective anthology has for the first time been brought to the knowledge of the reading party in Bulgaria. In a great measure, it is what would determine their significance as tools for a further scientific research.