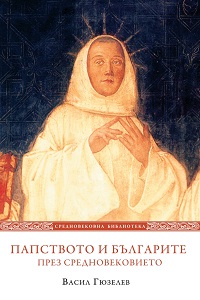 Author(s): Vasil Gyuzelev
Subject(s): Christian Theology and Religion, History, Cultural history, Diplomatic history, Ethnohistory, History of ideas, Political history, Social history, Middle Ages, Theology and Religion, 6th to 12th Centuries, 13th to 14th Centuries, 15th Century
Published by: Фондация "Българско историческо наследство"
Summary/Abstract: The present title is an attempt to outline the relations, which the Papacy had with the Bulgarians in a rather continuous period of time – since they first established contacts in the middle of the ninth century up to the role of the Roman Church in the aftermath of the Ottoman invasion in the Bulgarian lands. The book has been divided into three parts. In the first part of the book, the history of the Papacy in the Middle Ages – from the foundation of the Roman episcopate to the dealings of the Renaissance Popes in the second half of the fifteenth century – has been retraced chronologically. The written account is structured along verified sources and reliable historic works of affluent church historians, combined along with general overview on the history of Byzantium and its dealings with apostolic Rome. The second part represents the core of the book; the particular aspects of the links that Bulgaria maintained with the Papacy in the Middle Ages, from the ninth up to the fifteenth century, as well as the various historic periods, have been analyzed there. The research is based on published, as well as unpublished or rather obscure sources. A considerable stress has been placed on those particular stages in times (the second half of the ninth century; the first half of the thirteenth century) when a possibility had arisen for a firm affiliation of Bulgaria to the Roman Church. In the third part, there are translated versions of various documents and narrative sources, which to a great extent illustrate the account, given in the second part of the book. The sources, cited in this section offer a viable opportunity for further research, and because of this they could be considered as an adequate prospect of on-going studies and consequential work on fascinating problem matter of the sort.