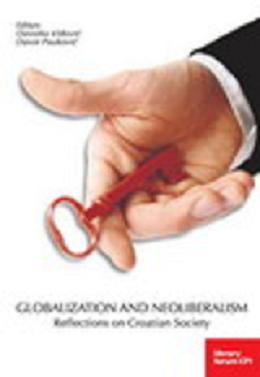 Contributor(s): Davorka Vidović (Editor), Davor Pauković (Editor)
Subject(s): Politics / Political Sciences, Supranational / Global Economy, Civil Society, Governance, Sociology, Economic policy, Government/Political systems, International relations/trade, Welfare systems, Developing nations, Nationalism Studies, Rural and urban sociology, Sociology of Culture, EU-Accession / EU-DEvelopment, Ethnic Minorities Studies
Published by: Centar za politološka istraživanja
Keywords: globalization;
Summary/Abstract: This book is a collection of papers written and presented at the Panel Discussion on Globalization and Neo-liberalism, held on April 19th 2006 in Zagreb. This Panel Discussion was organized by the Political Science Research Centre Forum. It gathered eminent Croatian scientists from different scientific fields of research (sociology, political sciences, economics, history, law, philosophy and others). Multidisciplinary approach ensured a fruitful discussion resulting with this book which aims to enlighten many globalization issues from different aspects and points of view. Understanding the changes in contemporary society connected with processes of globalization and the neo-liberal doctrine and the ways in which they reflect on Croatian society and state requires systematic and multidisciplinary scientific rethinking. In the scope of this comprehension the book intends to provide at least an overview of possible responses to the challenges of the world we live in. Although primarily based on scientific and theoretical ground, papers presented in this book also aim to offer some pragmatic ideas and solutions, which is particulary important for the positioning of Croatian society in the context of transition, European integration and adaptation to global processes. Following the given framework of globalization and neo-liberalism, papers presented in this book examine and question different issues starting with the definition of globalization, neo-liberal globalization and globalism in terms of concepts and contents. Also, putting these phenomena in a historical context offers a basis for understanding of contemporary transformation of society and social structures. Various aspects of global relations have been discussed: the role of major and powerful states, the role of international organizations and transnational corporations, changes in labor conditions, position of small countries, transformation of the welfare state and emersion of new forms of social solidarity, security on global and local level, global environment destruction, antiglobalization responses and others. From different points of view the papers in this book examine almost all important specific implications of the influence globalization and neo-liberalism have on economies, politics, welfare state, regulation, security, environment and social issues, aiming especially at pointing out positive and negative consequences for Croatian society.

The two sides of globalization

What is global change?

Neo-liberal Globalization in the Clash of Civilizations

A Historical Development of Neo-liberalism

Political Economy of Globalization and the Position of Croatia

Globalization, Quarterly Capitalism and Its Reflections in Croatian Society – The Problem of Capital-Relations Transparency in Croatian Economy and Society

Neo-liberal globalization model and the welfare state: The question of equality