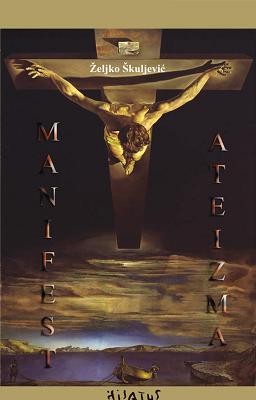 Author(s): Željko Škuljević
Subject(s): Philosophy, History of Philosophy, Philosophical Traditions, Metaphysics, Ethics / Practical Philosophy, Special Branches of Philosophy, Ancient Philosphy, Philosophy of Middle Ages, Renaissance Philosophy, Early Modern Philosophy, 19th Century Philosophy, Contemporary Philosophy, Marxism, Philosophy of Religion
Published by: U.G. »HIJATUS«
Keywords: atheism; enlightenment; atheism of reason; New Atheism; secularism
Summary/Abstract: The very title of the book, its polemical structure as well as the introductory assumptions, could seem rather proscriptive and exclusivistic to delicate readers. Regardless of the first part of preliminary jigsaw, Manifest (additional confusion and dilemma are derived from etymology of the Latin word manifestus meaning obvious, lucid, plain), doesn’t have aspiration to express the integral program neither certain rigid rules which atheists should accept and follow in an organized way. The core of the issue is more adequately reflected in the debate atheism vs. theism, namely philosophy and / or theology which requires “altercation” (understandably not in the strict juridical meaning) as a sort of dialogic agonistic or “competition” in the most positive sense of the word: sophistic. Apart from controversy which is embedded in the philosophy of religion as eminently philosophical discipline, the second chapter (Atheism of reason) to certain degree suppresses her “theological (half) sister”, namely “religious philosophy of religion”. Arguing with some of prominent connoisseurs of Greek philosophy related to the a/theology of Greek thinkers I don’t find pretentious or scandalous. The critical perception of religion and religious phenomenon, apart from partially paradoxical notions; “polytheistic monotheism”, “scholastic nonscholastics”, “Christian atheism”, “priests nonbelievers” etc, is not something unknown or unprecedented in this type of literature. Enlightenment doesn’t imply, as many authors claim, the equality between atheism and enlightenment. With the exception of Holbach, who is, not utterly unjustified and with the certain amount of cynicism, called “divine”, the rest didn’t transcend deism including Francois-Marie Arueta, alias Voltaire according to whom this turbulent period is named. Then we must mention Ludwig Feuerbach (I’m not certain that he deserves to be qualified as “left Hegelian” bearing in mind that he treated idealistic philosophy substantially as a sort of theology) and his idea of “manlike god”, then Marx who, opposing his predecessor, the genesis of religious alienation reveals in the pragmatic (social) alienations. Mentioning the notorious critical-religious sentence “religion is opium of the people” not “opium for the people”, I assume that theological and dialogical perception of Marx is significant for this dialogue, which is rather unpleasant – from theological point of view.- The bewilderment, dismay and consternation of most theologians triggered by New Atheism served as inspiration for the third and the last chapter of the book. Namely, New Atheism and old theologies initiate renewed reassessment of what is verily new or old. With a kind of inversion (or replacement) it would be appealing to become participant in debate between representatives of old atheism and new theologies. If we agree that, barring few exceptions, the time of the onomies is over (which is replaced by inevitable substitutes - so-called “secularized societies”), let us conclude that while endeavouring to learn and accept (not only for cognitive reasons) Other and Different it is possible for both sides to “ mutually respect their own contribution to controversial topics in public life”. (Habbermas). Denying intention to convert violently and without arguments anyone to “true (a)theism”, atheist and theists, in a Socrates sense, “are divided only by their ignorance”… Digna cum reverentia, to potential collocutors.