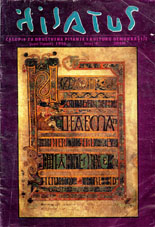 Summary/Abstract: Particular philosophical disciplines are showed as organic part of Petronijevic's metaphysics, while virtues and flaws are expressed in it's specific shares. Although similarity is obvious (ex. Spinoza's monism, Leibniz's pluralism; that's why eclectical term of its characteristic system of "monopluralism"). His philosophy comprises novelty. Realising empirical-racionalist insight Petronijević, unlikely "pure racionalists and empirics", based his metaphysics on the ground of experience. Direct facts of conscious experience include universal an logically obligatory truths. Although problem is well disposed, the utmost conclusions of such analizes are philosophically regressive. That is visible for instance in returning to problems of metaphysics untill XVII century. "Panconssiousness" as result of objectively idealistic position, than racional and spiritual "top" of his metaphysics, mainly annihilate novelty. Speaking and proving, using language of mathematics and geometry (discretum, point, continuum, numeral, etc.) doesn it avoid formality and statical moment, where "truthflulness" is sacrified because of "preciseness". Infinity and immortality of pure subject (in Decart's meaning) is meta physical substance of his ethics which is, above all, theoretical and intelectual. Man of his ethics is able to act only as theoretical abstract being, which relation toward practical, concrete motive is indiferent. Practical way of life in a sense of realising this or that moral aim is not necessary in this hypostasis of ethics and freedoom. There is no need to conquer the fact of freedoom. It is nonhistorical infinite and false superior attitude; as it (freedoom) is not conquered nor lost, man is slaved by the same absolute freedoom. Although, as criterion of "truthfulness", it represent Reality; this inhuman and so unreal and nonhistorical metafisis stays far behind that Reality.