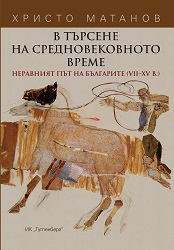 Author(s): Hristo Matanov
Contributor(s): Lyuben Dimanov (Illustrator)
Subject(s): History, Cultural history, Historical Geography, Diplomatic history, Ethnohistory, Local History / Microhistory, Political history, Social history, Middle Ages, Special Historiographies:, 6th to 12th Centuries, 13th to 14th Centuries, 15th Century, Period(s) of Nation Building
Published by: Издателска къща "Гутенберг"
Keywords: Medieval Bulgarian history; History; Byzantium; Ottoman Balkans History; History; Bulgarian History; Balkan History
Summary/Abstract: In the book "Seeking the Middle Ages" Prof. Hristo Matanov is presenting the rich and dramatic history of the Balkan region through the Bulgarian history and culture. In this study Prof. Matanov shows the location of Bulgaria not only as crossing point of the ancient trade routes between Europe and Asia, but as a crossing point of politic interests and cultural transfer. This has brought the necessity to withstand the pressure that was coming from North-West, North-East and from the South and has played a significant role in the rises and the downfalls of the Bulgarian kingdom. The author's contribution for the book is that he has written this solid history in such way, that it may be read, understood and appreciated by both academic readers and common readers, who are interested in history. The author gathers in one book the entire Medieval history of Bulgaria, the foundation of the kingdom, the complex Politics, in which the Bulgarian rulers had to go in to in order to protect their kingdom and subjects, the religious shift of the kingdom to Christianity from paganism and the periods when it was conquered by Byzantium and later - by the Ottoman empire.