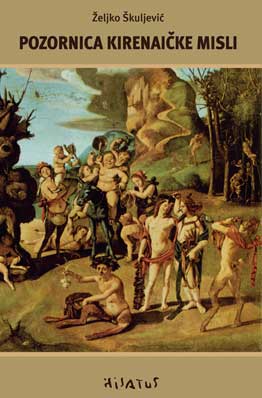 Author(s): Željko Škuljević
Subject(s): Philosophy, History of Philosophy, Metaphysics, Ethics / Practical Philosophy, Ancient Philosphy
Published by: U.G. »HIJATUS«
Keywords: Cyrenaic thought; hedonsim; Aristippus; rational pleasure; Epicurus; carnal pleasure
Summary/Abstract: It is inherited attitude that the lack of needs attributed to the self-sufficiency of the Cynic’s doctrine is probably Socratic method, while Cyrenaic school mainly regarding the quantity of “physiological hedonism”, appears incredible. Although Antisthenes, during his life, underestimated Aristippus glorification of pleasure understood as the life primordial fact, their differences were not significant. Finally it is all about the common substance and the same ethical notion; the concept of self-restraint based on rational knowledge. Although Cynics accept Socrates idea that ratio is the foundation of virtue, they do not deny involuntary pleasure but only (pleasure) which is passionately sought. Cyrenaic was able to discipline pleasure (restrain himself as the one who enjoys), analyze attentively and choose rationally. He (Cyrenaic) could quit the utmost pleasure and found something good in the worst. He was capable of receiving pleasure in the best possible way but also to reject the same pleasure. The following anecdote describes that Cyrenaic position: Three hetaerae were offered to Aristipppus by Dionysus to choose the most beautifulone, he (Aristippus) selected all three (having in mind that even Paris was not lucky although he gave priority to Aphrodite) and later on release them all. Aristippus heard objections regarding his noble life and answered that it couldn’t be bad solution because “bonvinant” style is maintained and respected during religious ceremonies.Philosophical improvement of hedonistic principle is more attached to the subsequent followers; to Aristippus Junior (metrodidactos) and Theodore named atheos. Apart from them the following disciples should be mentioned; Ethiopian from Cirenaica, Parabates, Hegesias peisithanatos (who advocated suicide) and Anikerid who paid ransom and thus freed Plato of slavery. There are little available evidence which could determine the meaning of the link between Cyrenaic epistemology and Protagoras relativism. Both in antique and modern discussions this hypothesis is dispersive and non-conclusive. Zeller claims that Cicero, Eusebius and Aristocles of Messene emphasized discrepancy regarding the above mentioned link, but in spite of discordance their teachings are identical in the affirmation of subjectivity of all our impressions. George Grote shares the same philosophical insight into deep concordance of seemingly antagonist teachings. Protagoras concept is well known; “man is the measure of everything..” Bearing in mind tradition Guthrie considers Aristippus and Cyrenaics (epistemologically speaking) less skeptical because they will not ultimately deny the reality (the external world) out of personal (human) scope. In any case Mannebach point of view is largely accepted in philosophical circles; namely that “it’s neither proved nor even probable” that Cyrenaics followed Protagoras.The issue of non-possibility of rational pleasure (the idea inspired by Plato’s Fileb) does not provide simple answer. Reconsidering the idea of Goodness Platonized Socrates meditates: if that goodness is neither rationality (fronesis) nor pleasure (hedone), what’s the third possibility? Judging that Goodness must be complete and self sufficient than it can’t be the mixture of pleasure and rationality. Fileb insists that pleasure is not goodness according to its nature; it is not quantitatively or qualitatively unlimited. Socrates introduces the idea of Mind… Although it seems that blending pleasure and ratio (hedonea and nus) is desirable solution, the dominance of ration over pleasure is evident not without Socrates influence. Epicurus lauded ratio as supreme value which triggered resistance among Aristippus followers against his hedonism. Does it imply impossibility of rational pleasure? Is it feasible assumption to derive pleasure out of ratio or vice versa? (that possibility exists in Epicurus philosophy). His spiritual serenity eliminates the idea of pleasure and the idea of sage which is suggested in some modern discussions (Marcuse).Having in mind that Aristippus was familiar with philosophy of Plato his animosity towards carnal pleasures is understandable. Hedonists praise elevated character of senses (the very opposite disposition for those who scorn carnal pleasures), meaning that sensitivity is sensual and “skin of the reality deserves devotion”. Which kind of carnal pleasures are preferred by hedonistic philosophy? Possibly the carnal pleasures of hedonistic angel, as suggested by Michel Onfray, or; to put it in another words, “hedonism of the carnal matter, the very wisdom of organism”.If freedom is condition sine qua non of hedonistic life Aristippus choice makes angry (even today) puritans and fake moralists. During his life he was blamed that “he loved old wine and hetaerae”. It seems today a bit more understandable why Aristippus text “to those who hate old wine and hetaerae” doesn’t exist. Thanks to “gloomy Platonists”, above all…