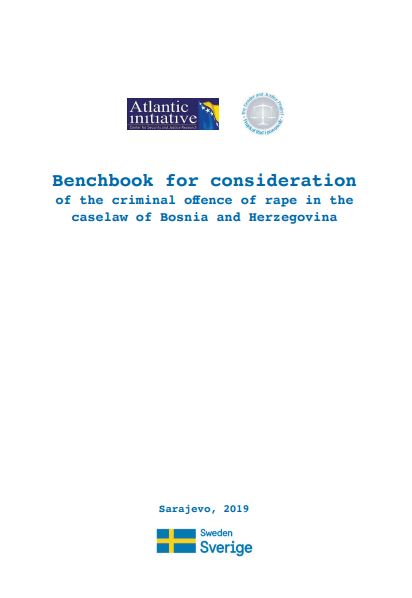 Contributor(s): Majda Halilović (Editor), Ivanka Marković (Editor), Maida Ćehajić-Čampara (Editor)
Subject(s): Gender Studies, Criminal Law, Human Rights and Humanitarian Law, Clinical psychology, Criminology, Studies in violence and power, Health and medicine and law, Victimology, Ethnic Minorities Studies, Penal Policy, Court case, Asylum, Refugees, Migration as Policy-fields
Published by: Atlantska inicijativa: Udruženje za promicanje euroatlantskih integracija BiH
Keywords: criminal offense; criminal law; rape; court; judicial practice; BiH; manual; health; psychological trauma; gender; penal policy;
Summary/Abstract: Although rape constitutes the gravest criminal offence against sexual freedom and morale and is one of the most severe allegations in contemporary criminal legislation, an analysis of publicly available cases carried out by the Atlantic Initiative in late 2017 indicated a need to direct greater attention towards the crime of rape in justice systems in Bosnia and Herzegovina (BiH). The results of that analysis, presented in the second chapter of this text, revealed inconsistent practices in the evaluation of mitigating and aggravating factors, insufficient consideration of the mental health consequences for victims of rape, and the frequent reduction of sanctions or the imposition of minimum sanctions for this offence. It also uncovered evidence that stereotypes about the behaviour of victims and perpetrators impacts outcomes. In response, the Atlantic Initiative facilitated the work of a panel of twelve judges from different courts in BiH through the “Gender and Justice Project in Bosnia and Herzegovina,” to consider existing court practices in cases of rape and develop recommendations and resources for work on these cases. The panel held monthly meetings from December 2017 to June 2018, developing this Benchbook through working groups, discussions with experts, and analysis of cases. The panel believes this Benchbook can help judges better understand the criminal offence of rape, as well as its short- and long-term effects on victims, and can play a role in helping them overcome dilemmas that arise in these cases. During its work, the panel considered legislative solutions in BiH, focusing on the uniformity of provisions governing the criminal offence of rape and the sanctions prescribed by criminal codes; but also on sentencing, particularly legislation directly relating to “court sentencing.” The panel also analysed the application of mitigating and aggravating factors, which were observed to have an important if not a decisive influence on the specific type and severity of sanctions imposed by the courts. Further, the panel reviewed qualifying forms of rape and the consequences of gender bias in sexual assaults, and took an in-depth look at the psychological traumas experienced by victims of rape. In the context of discussions and presentations, the panel analysed the international practice and concept of “rape without consent” as well, which is promoted by the Istanbul Convention but has not yet found its place in BiH (other than as a crime against humanity). Along with references to court practices and literature from BiH and beyond, this Benchbook offers the conclusions, recommendations, and key findings of the panel that developed it. The Benchbook is divided into seven chapters that can be used separately or together as a resource in work on criminal cases of rape. Chapter One considers legislation in BiH on the criminal offence of rape. Chapter Two reflects on caselaw relating to the application of mitigating and aggravating factors. Chapter Three reviews the qualifying framework of the criminal offence of rape. Chapter Four provides an overview of the psychological consequences of rape for victims. Chapter Five addresses gender bias and socio-cultural specificities of the criminal offence of rape. Chapter Six presents an analysis of bias against disabled persons, minorities, and migrants with regard to the criminal offence of rape. Chapter Seven provides panel recommendations for the evaluation of mitigating and aggravating factors when determining sanctions for the criminal offence of rape.

The Legal Framework: Legislation in BiH on The Criminal Offence of Rape

Sentencing in Rape Cases and Other Crimes Against Sexual Freedom: An Analysis of The Mitigating and Aggravating Factors Applied by Courts in BiH

Qualified Forms of The Criminal Offence of Rape

The Psychological Trauma of Rape

Panel Recommendations: Mitigating and Aggravating Factors Related to The Criminal Offence of Rape