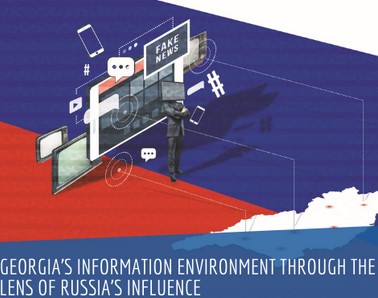 Contributor(s): Elīna Lange-Ionatamišvili (Editor), James McMillan (Editor)
Subject(s): Media studies, Human Rights and Humanitarian Law, Government/Political systems, International relations/trade, Security and defense, Political behavior, Politics and communication, Comparative politics, Health and medicine and law, ICT Information and Communications Technologies, Geopolitics, Peace and Conflict Studies
Published by: NATO Strategic Communications Centre of Excellence
Keywords: Georgia; Strategic interests; Russia and its political impact in Georgia; May 9 - Victory Day; COVID-19; media in Georgia;
Summary/Abstract: The executive summary provides a brief overview of the key ideas discussed in the publication. It also highlights questions for further discussion. Since the dissolution of the USSR, one of Russia’s main objectives has been to keep former Soviet republics under its informational, economic, and military influence. In the case of Georgia, its persistent westward outlook has triggered openly hostile rhetoric and action from Russia. In August 2008, Russia demonstrated its readiness to take military action to obstruct Georgia’s NATO integration and assert its dominance in the region. This, however, has only strengthened Georgia’s desire to pull away from Russian influence and integrate more closely with the European Union and NATO. In fact, Georgia plans to formally apply for EU membership in 2024. Georgia’s geopolitical setting is not one to be envied. Aside from NATO member Turkey, Georgia does not have Western-integrated allies in the region. It also cannot escape the economic and military influence of its larger neighbour. Russia and the Commonwealth of Independent States are Georgia’s main trade partners. Twenty per cent of Georgia’s territory has been occupied since the 2008 war, and creeping occupation, including regular kidnappings along the administrative borderline, continues. Apart from other factors, such as growing Chinese influence in Georgia, which are beyond the scope of this publication, Russia remains the main threat to Georgia’s stability and development. In terms of Georgia’s information environment, the Kremlin tries to exploit the following vulnerabilities: Georgia’s fragile economic situation, painful social issues, high political polarisation, media-party parallelism, conservativism and traditionalism, as well as certain Euro-Atlantic integration fatigue, where Georgians wish to see more progress. In addition, the occupied territories of Abkhazia and Tskhinvali/South Ossetia, as well as conflicts elsewhere in the region, such as Nagorno-Karabakh, remain additional pressure points.

How Does Russia Target the Physical Domain to Achieve Its Strategic Goals in Georgia?

May 9 (Victory Day) Commemorations in Georgia

How to Respond to Information Operations While Preserving Commitment to Free Speech and the Free Flow of Ideas?