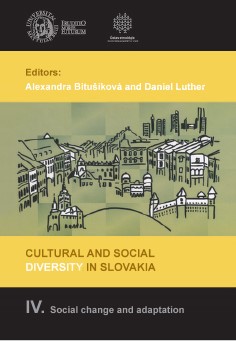 Contributor(s): Alexandra Bitušíková (Editor), Daniel Luther (Editor)
Subject(s): Gender Studies, Local History / Microhistory, Social history, Culture and social structure , Health and medicine and law, Rural and urban sociology, Sociology of Culture, Transformation Period (1990 - 2010), Present Times (2010 - today), History of Communism, Migration Studies, Ethnic Minorities Studies, Sociology of Politics, Globalization
Published by: Ústav etnológie a sociálnej antropológie Slovenskej akadémie vied
Keywords: Cultural and social diversity; Slovakia; Social change; Postsocialism; Working life; Sustainable lifestyles; Vietnamese migrants; Indian Medicine in Slovakia; Holocaust in Slovakia;
Summary/Abstract: The publication hereby presented to the public focuses on the processes of adaptation of individuals and groups of urban inhabitants in the period of social changes after 1989. From the outside, the collapse of Communism in Czechoslovakia was a simple act of formal resignation by which the Communist Party of Czechoslovakia admitted its inability to further lead this country. The subsequent changes, however, affected almost all aspects of everyday life. The developments in this unstable and heterogeneous political situation was reflected in social relationships; the restructuring of ownership had positive effects on some people, and negative ones on others; the changes in the labour market and employment weakened the life securities, and changed the work habits inherited from the time of socialism. The period after 1989 was characterised by the arrival of foreign companies and their managers, and proven ways of advertising and goods from all over the world, changing the culture of work, clothing, housing, catering, etc. The mass media crossed the borders of the “socialist camp” and brought new ideas, ideals, cultural models or ways of behaviour. The “global world” penetrated lives of the citizens in many ways. The free market destroyed the long-preserved cultural models and became the determining criterion of values for many. The norm our society places in front of its members is the norm of ability and willingness to play the role of a consumer (Bauman 1999: 98). Commercialisation and globalisation are the accompanying phenomena of these processes.

TRANSFORMATION OF MICRO-AND MACRO-WORLDS AT THE TIME OF POSTSOCIALISM

CHANGES IN THE WORKING LIFE: THE STORY OF A COMPANY AND ITS EMPLOYEES

ON THE WAY TO SUSTAINABLE LIFESTYLES: CHANGES IN FOOD PRACTICES IN SLOVAKIA

ACCEPTATION OF LGBTI MOVEMENTS IN THE CURRENT SOCIO-POLITICAL CONTEXT

THE HOLOCAUST IN SLOVAKIA: PERSPECTIVE OF OBSERVERS. COPING WITH THE PAST?

ADAPTATION OF FAMILIES FORCIBLY DISPLACED UNDER THE ACTION B: THE PAST AND THE PRESENT