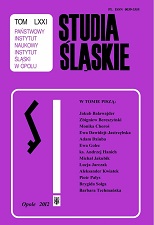 Miejsce i znaczenie migracji zagranicznych w rozwoju regionalnym– założenia, cele i wstępne ustalenia projektu habilitacyjnego
The place and the significance of foreign migrations in the regional development–the assumptions, goals and initial establishments behind the project

Summary/Abstract: the aim of the article is to present the basic goals, assumptions and the methodology of research conducted within the project of preparing a work to fulfill the requirements to earn the professor’s degree, under the title „Miejsce i znaczenie migracji zagranicznych w rozwoju regionalnym” („the place and the significance of migrations abroad in the regional development”). in its theoretical layer, the work develops the concept of a migration region meant to refer to an area where migrations are a phenomenon significant enough to influence (positively or negatively), to a substantial extent, processes of the regional development. On this level, furthermore, it was attempted to connect the theory of regional development and migration theories as far as their applications to explain phenomena of mobility in the migration region is concerned.Recognition of foreign migrations in Opole Province and other regions of the country was carried out within the area of empirical and utilitarian establishments, paying attention to their causes, scale, character, as well as the influence on the regional development. in the work, reference was also made to the system of migration policy that is being formed in Poland. Moreover, examples of selected countries and regions in europe and outside it were used, as they boast of long emigration traditions and effects of these population transfers are visible both on the all-country scale and on the level of regional structures.