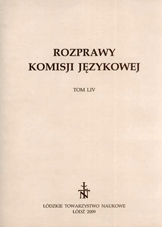 Summary/Abstract: This note discuses elements of Celtic origin present in contemporary Polish vocabulary. Polish did not have any direct contacts with the Celtic languages, however, some elements of Celtic (i.e. Irish, Scottish Gaelic, Welsh, Breton) origin entered it via other languages, especially English and French. Additionally, several early borrowings from Continental Celtic spread through Latin, and subsequently the Romance languages, to other languages, including Polish, thus becoming internationalisms of Celtic origin. For the purpose of this note all such indirect borrowings will be referred to as ‘Celtic elements in Polish vocabulary’ . Section 1 of this note presents the more recent borrowings from Irish, Scottish Gaelic, Welsh and Breton, section 2 lists the ancient Celtic elements which found their way into Polish (and numerous other modern languages).