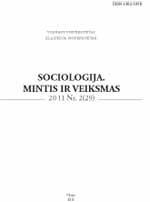 Summary/Abstract: Homo Irretitus, a full-fledged netizen of information society posited as the netting and altogether netted human being, has already turned into the basic embodiment of contemporary homo politicus, homo faber and homo ludens. First, the digital divide ceased to be a universal, both endogenous and exogenous, form of social exclusion. The pace of telematically impelled social change has been accelerating for decades, so that the endogenous digital divide rapidly melted into the manifold patterns of continuous social differentiation, thus making digitally incited polarization more and more distinctively manifest only on the exogenous, international scale. Second, due to the globalising power of telematics, businesses and workplace realities are directly dependent on the pace of technological innovations and obtainable competential resources. The habitual habitat of homo faber has been forcefully translated into the digital format. Third, the telematic fabric of everyday activities and popular culture fused into one indistinguishable whole. Homo irretitus ludens became at once indisputable ruler and humble dependent of the global digital universe. Does this threefold transmutation herald a new beginning and abrupt end, or rather amount to a continuous alteration of basic perennials which have been part of life as we know it for centuries?