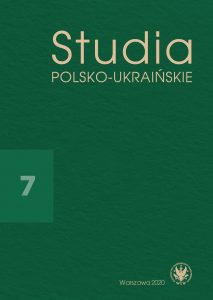 Summary/Abstract: The article was written on the basis of the so-called Warsaw-Kholm archives of Ivan Ohiienko – a well-known Ukrainian statesman, religious figure, and scientist, professor at the University of Warsaw in 1925–1932 – which were found in the archive of Polish Institute of National Remembrance in Warsaw and studied by the author. The documents were still considered lost during the Warsaw Uprising of 1944. The reasons for dispersing and the ways of moving this archive collection are clarified, the facts about the preservation of a part of the documents and the way they got after the war to the archive of the Ministry of Internal Affairs of Poland, and later to the archive of Polish Institute of National Remembrance in Warsaw, are presented here for the first time. The characteristics of the archive are presented in terms of the volumes, personalities, and public institutions with which the creator of the archive corresponded. The multifaceted issues of the correspondence are considered against the background of the philosophy of being an individual in the context of emigration. The activities of Ohiienko in the complex reality of emigration are analysed in several aspects: the struggle for physical survival, civil and professional assertion, and the thirst for fulfilment of his duties before he was forced to abandon the Motherland because of political reasons. The conclusions emphasise the need to resolve the issue regarding the copying of the discovered archival documents at the intergovernmental level, scientific study of them, and their first publication in Ukraine.