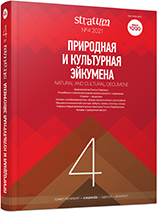 Summary/Abstract: Burials with horses are known among the Western Balts of the Roman period. It is believed that in this era, horses in the graves accompanied the dead soldiers and were of a symbolic character, they emphasized the high social status of the buried. The conclusions were made exclusively on the basis of archaeological material. These conclusions of archaeologists are quite legitimate, indeed, the presence of weapons in the graves, including “professional”, equestrian equipment and rather expensive metal elements of horse equipment indicates that these burials belong to soldiers of a certain status. It seems appropriate to verify these conclusions with the help of anthropology and archaeozoology. Such an attempt on the example of burial 3.2017 of the Romanovo-Pugachevsky Prud cemetery is undertaken in this work. The burial belonged to a man about 30 years old and a teenager, whose gender has not been established. The radiocarbon date of the burial corresponds to the first half — middle of the 2nd century. The objects found characterize the man as a warrior. The teenager buried with him may have occupied a dependent, subordinate position in relation to this warrior. The results of studying the bone remains of a horse from this burial complex allow us to attribute them to the skeleton of a war horse of 6—8 years old. The presented multidisciplinary data can serve as a good illustration of the hypothesis that the Western Baltic burials of the Roman period could belong to the warriors-horsemen and their war horses.