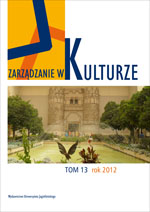 Ekonomiczne aspekty Internetu: powstanie komercyjnych fundamentów sieci
Economic Aspects of the Internet: the Rise of the Commercial Foundations of the Web

Summary/Abstract: The article describes the Internet and the crucial conflict in expectations as regards common convictions which emphasize the social view of the Web. Such views are very popular and as a result they bring the great vision of the Internet as a new public space which demands democratic civil rights for example. In this situation inevitably a conflict emerges between this vision and the business which treats the Internet as its natural environment. The article describes the very beginnings of the Internet and the early phase of this conflict, which has existed from the very beginning mostly due to the counterculture of the sixties in USA. The article also describes the commercial sources of the Web which allowed its voluminous progress and the role of the third player in this game – the Government of the USA which has seen the Internet as a chance for potential economic growth. The article also emphasizes the great significance of the macroeconomic environment in the eighties, which also considerably enhanced the development of the Web. The article documents the predominance of the economic aspect of the Internet, which has become a fact already at the beginning of the nineties and describes incidents which confirm this situation, for example the rebellion of Jon Postel in 1998.