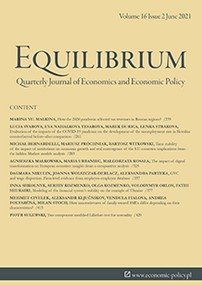 Summary/Abstract: Research background: The current changes in the global stock markets are related to the next wave of the industrial revolution “Industry 4.0”. It is expected that the Industry 4.0 will lead to an acceleration of the innovation process and growth of volumes of tailor-made products. The stock markets started to react to the upcoming technological changes over the last decade, which are reflected by the changes in the composition of the major stock indices where the technological sector started to grow in importance. But innovations are not only connected with the specialized technological sector, but they are also of direct concern to the whole spectrum of economic entities. Besides the private investments that are usually allocated via the stock market, also the public sector investments play an important role. Purpose of the article: The aim of this paper is to investigate the relationship between government expenditures on research and development (R&D) and stock markets (and GDP) in the US and in Germany. Methods: We use the tools of descriptive analysis as well as correlation and regression methods of estimation. Findings & Value added: Our research confirms that the collection of data on R&D on annual basis for Germany and the US is insufficient for analytical and systemic management purposes. The real effects of investments in the R&D are time lagged. The regression analysis of annual data confirms only the statistical importance of patent applications as well as interest rate and stock index as independent variables in explanation of variability of real economy growth during the 1985–2017 period. Our model did not prove the significance of government expenditures. We can explain it, among others, by the fact that governments do not pay sufficient attention to the challenges yet, which are associated with the Industry 4.0, especially in the US, where the government expenditures in R&D gradually decrease. The governments in both economies try to increase their support, but fiscal sustainability is a limiting factor.