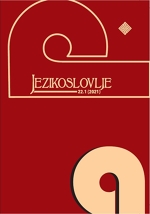 Summary/Abstract: This paper analyses the semantic role of the subject in constructions with sensory verbs from a cognitive-grammatical perspective, and primarily its agentivity. Namely, the basic categorisation of perception verbs is established precisely in relation to the semantic role of the subject in constructions with perception verbs, while the main semantic determinant of the subject, based on which sensory verbs are divided into volition or active perception verbs, non-volition or passive perception verbs and flip-verbs, is its agentivity. The main goal of this paper is to review the generally accepted categorisation of sensory verbs as stative verbs or state verbs, especially when it comes to verbs like see and hear, which are often classified as passive perception verbs and stative verbs based on superficial and imprecise language tests, while the subject is often described as passive, non-volition, and non-agentive, which then leads to imprecise grammatical descriptions and misunderstandings, not only of perception verbs but also of other grammatical concepts important for studying verbs in general, such as event structure of construction or aktionsart, semantic verb extensions, syntactic environment in which they appear, transitivity, etc. In this paper, the analysis of the semantic role of the subject in constructions with sensory verbs of sight and hearing is based on the methodology of cognitive linguistics, i.e. cognitive grammar, with emphasis on the idea of language embodiment, which includes an encyclopaedic view of meaning, the concept of canonical event model and the idea of gradual categories based on prototype effects.