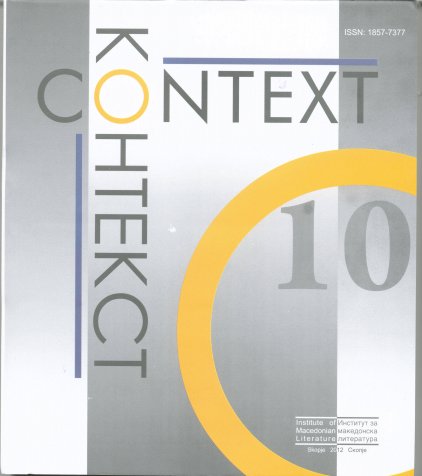 Summary/Abstract: This article deals with the verb forms of more than twenty Church Slavonic manuscripts of Macedonian redaction in the period between 12th and 14th centuries. The comparation is made with the Old Church Slavonic manuscripts as well as with the Macedonian vernacular in order to determine similarities and differences among them. The verb forms in these texts, on one hand, are archaic, preserving the ending -t 7 in 3rd person singular present, asigmatic aorist, old forms of conditional with bim 7, etc. Such forms related the manuscripts to the canonic ones, and indicate the archaic features of the original book, or reflect the certain relation to the cyrilomethodian tradition. On the other hand, the analyzed texts contain a large number of innovations that present the linguistic influence of the writers' vernacular. The most significant inovations in present tense are: the occurence of the ending -[7 in 2nd person singular, ending -me in 1st person plural, the new forms of the verb b7yti: si for 2nd person singular, e for 3rd person singular, esme for 1st person plural, ste for 2nd person plural. The leveling of endings for more verbal groups in 3rd person plural present, and imperativ is evident. The imperfect forms in most cases are contracted. There are some cases without auxiliary verb in the 3rd person singular perfect, and past active participle on -le. The loss of infinitive and supin is notable.