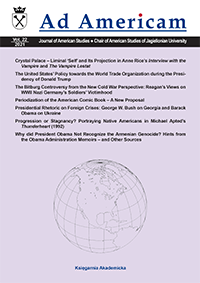 Summary/Abstract: The article aims to present a new proposal for the periodization of the history of American comic books. The introduction deals with the problems of other propositions: the academic one created by Arthur Asa Berger and the so-called Olympic / Mainstream that is mainly used by industry artists and readers. The most critical short comings of these periodization are also listed, including them being outdated. The new proposal complements the deficiencies of the previous two: in its actuality, it focuses on the transformations of the comics genre caused by the socio-political implications of the events of September 11, 2001. Each epoch was given specific time frames, cut-off dates, events, and characteristics.