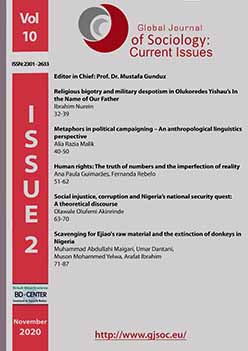 Summary/Abstract: While across known histories of societies the human societies had always developed within the confines of their limits of social justice, the security or otherwise of societies had always been directly proportional to their level of social justice. Invariably, this implies the higher the acceptance and recognition of the need for social justice by a society, the higher the society’s chances for national security. Social justice has thus proven to be a critical sine qua non for an egalitarian and a just society where equity, selflessness and equitable distribution of resources reign. However, the lack and deliberate emasculation of social justice within the society by the state and/or its machineries has over time, consequentially, informed a pathological situation; a situation where, due to the absence or deliberate neglect of the need for social justice in the accumulation of wealth, distribution of wealth and resources as well as social, economic and political relationships amongst the people, the rich are becoming richer whilst the less privileged are becoming more disadvantaged. The social implication and effect of this social pathology is the impulse by the rich or the privileged to see and use corruption to accumulate more wealth, resources and power in unjust social, economic and political exchanges in their bid to maintain the unjust socioeconomic and political systems, whilst the poor and the less privileged tend to see and use corruption as a leveller and means to accumulating their own share of the societal wealth, resources and power. The corrupt environment created by social injustice is therefore antithetical to any country’s quest for national security. This is chiefly because national security objectives and corruption are two parallel lines that cannot and have never met. This article therefore argues that social justice backed by egalitarian and equitable distribution of wealth, resources and social services by the government would bring about a corrupt-free society where insecurity would be minimised and reduced to the barest minimum.