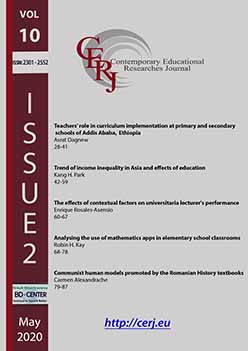 Summary/Abstract: This paper proposes a historical approach of Romanian communist education as it is reflected in the textbooks edited in the second part of XX century. For communist regime the textbooks, especially history ones became a tool of promotion political principles. There are many pictures, texts, exercises, additional readings which offer enough examples about what behaviour ought to be (non)appreciated and manifested by students, what they have to feel, to act or not. Also, scientific contents of textbook transmit to students a set of beliefs and values even if the teacher do not intend to focus on them. In this way, history textbook could be a perfect promoter of communist thinking and lifestyle. In addition, the textbook narrates about some 'heroes' and their acts, gestures, political and military victories. Talking about them, it is a good way to promote those personalities that could become 'models' for younger generation. Using theoretical research methodology, we have structured human models, as they had presented in the history textbooks, placing them into a communist human typology. As a result, this paper demonstrates that the textbooks have been important ideological tools, having a bigger impact to studentsâ€™ consciousness and behaviour.