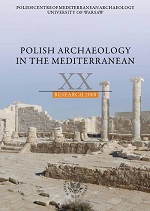 Summary/Abstract: Excavations by the PCMA ’s Polish–Egyptian team in Alexandria focused once again on the central part of the Kom el-Dikka site. One area of explorations covered a sizable section of the Ayyubid–Mamluk cemetery, which has been investigated extensively in the most recent seasons. In an adjacent sector of the site, digging continued on a huge mound of ashes and typical everyday refuse, located to the south of the Imperial bath complex from whence most of this rubbish had issued. The underlying layers contained more of the ruins of an extensive early Roman house, including a floor mosaic with geometric decoration. Work within the frame of the long-term conservation project implemented by the PCMA covered primarily the conservation and partial restoration of the southern brick façade of the bath complex. Sections of the vaulted subterranean structure and hypocaust cellars found in the basement of the baths were also rebuilt. Preservation treatment was undertaken in the apodyterium. Other areas where conservation measures were taken as required included the cistern complex accompanying the baths.