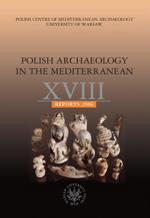 Summary/Abstract: Fieldwork in recent seasons had brought the discovery of a large and well-preserved complex of lecture halls (auditoria) of Late Roman date. This year, three more lecture halls (RS, T and W) were cleared in area CW. In area L a fragment of a medieval Moslem cemetery overlying the southwestern part of a cistern was explored, uncovering graves of the Upper Necropolis immediately below the present topsoil. Medieval Moslem graves CW 1 – CW 39, identified in this area during the previous season, were explored, and on-site anthropological examination was carried out. In area FE, a latrine, evidently linked with the bath complex and thus dated to the end of the 4th and the early 5th century AD, was discovered and excavated. The season saw considerable progress in the site presentation project, with a thorough facelift of the immediate surroundings of the theater, some conservation work in the baths and domestic quarters in the region of Street R4.