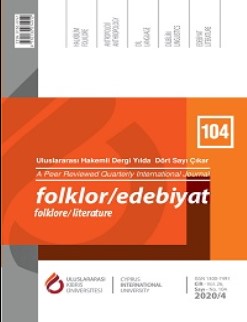 Summary/Abstract: Dance, which is described as the aesthetic movements performed by the human body in time and space, is considered to be one of the oldest forms of action and art in the history of civilization. In this respect, it is observed that dance, which is one of the most archaic subjects of human and social sciences, and the music that often accompanies it, has gained a very wide and special place in cultural production and consumption activities depending on the various functions it has undertaken in human life throughout the history of humanity and civilization. From this perspective, traditional dances also correspond to cultural indicators and forms of communication that reflect the beliefs, values, lifestyle, sociocultural and psychological characteristics of the community in which they are created, performed and passed down between generations. In this respect, traditional dances are one of the subjects that fall within the scope of folklore, which is an interdisciplinary discipline of cultural research and analysis. The relations between folklore and traditional dances have been so strong from the past to the present that the term “folklore”, which is the name of a scientific discipline, has been used extensively in naming traditional folk dances -in a wrong and narrow way-. Based on this attention, in the study, the adventure of halay, which emerged as a common form among traditional dances, from the past to the present in the context of the history of culture and belief is discussed in general terms. Accordingly, the relations of halay with early Turkish beliefs and lifestyles, its main features as a cultural sign system and communication form, and similar issues were examined with a holistic and interdisciplinary approach.