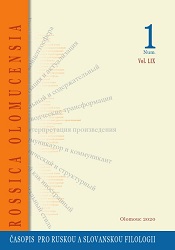 Summary/Abstract: Democratization of the Russian society in the last three decades, many social and psychological factors are indirectly reflected in language and speech. It is the Russian language that is ahead of other Slavic languages in terms of pace and scope of dynamics. Although syntax is highly resistant to extralinguistic factors, it is greatly responsive to them. The consequence of this is a mass entry of syntactic constructions that violate the traditional syntactic norm into speech usage, as well as the emergence of new phenomena in syntax that require analysis and evaluation. The aim of the paper is to identify the most active changes in the syntax of modern Russian speech against the background of Czech syntax, to define their nature, to discover the manifestation of the main trends of development. The objects of the research are new syntactic phenomena in the structure of word combinations and simple sentences, which are often revealed in Russian speech in the first decades of the XXI century. The material for the study involved texts published in modern Russian periodicals, as well as facts recorded by the author in radio and television broadcasts of the last decade; Czech periodicals were partially involved. The most active changes are analyzed: transposition, expansion of prepositions in subordinate phrases, simplification of the structure of a simple sentence, segmentation, compression, topicalization of the necessary part of the statement, parcelling, innovative changes in the functioning of nonagentive constructions. The revealed changes prove the manifestation of the main tendencies: “democratization” of the Russian syntax, the tendency to develop a new syncretism, the tendency to strengthen analytism.