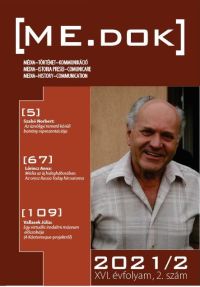 Zsidóellenes intézkedések a Szamos napilapban (1940–1944)
The Contemporary Press on the deportations of Jews from Satu Mare, 1940-1944

Summary/Abstract: Semitism of Nazi Germany had a fatal consequence: a genocide that claimed nearly six million lives. The German-friendly governmentin Hungary, due to the various anti-Jewish laws, fi nally removed the Jewish population from the country in 1944 with outstandingeffi ciency and speed. 437,000 Hungarian Jews were sent forcedly to the Auschwitz death camp, and the total number of the HungarianHolocaust victims exceeds 565,000. This number also includes the Jews who lived in Northern Transylvania, which territory had beenreturned to Hungary in 1940. This is how Satu Mare County returned to the Motherland. However, this meant not only a new era forthe population of Satu Mare, but also the introduction of the Jewish laws. The present study examines the situation of the local Jewsbetween 1940 and 1944 from the perspective of Szamos, the only local Hungarian-language daily newspaper. The purpose of theresearch was to reveal how journalists wrote about the “Jewish question”, and to identify the mechanisms of political propagandathat leads to the acceptance of the isolation, robbery, and physical destruction of Jews by the Christian population.