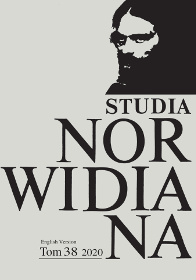 Summary/Abstract: This article concerns the sources of the quotation ubi defuit orbis, which Cyprian Norwid used as a motto to his poem “Spartakus.” The phrase has been identified as part of an inscription carved in stone by Jean-François Regnard, a French traveller and comedy writer, and his companions during their journey through Sápmi (Lapland). Most probably, thanks to Regnard’s Voyage de Laponie, Norwid’s epigram became well-known in European culture. It was quoted by Ignacy Krasicki in the treatise O rymotwórstwie i rymotwórcach, and by Victor Hugo in the novel Notre-Dame de Paris. It seems likely that Norwid drew this phrase from the latter. The article further discusses these sources and the significance of the motto ubi defuit orbis for the interpretation of Norwid’s poem.