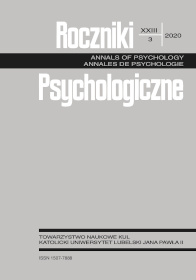 Summary/Abstract: Power in organizations creates interpersonal settings and lays the ground for designating individual roles and positions of superiors and subordinates. In such a context, influence tactics are situation-specific behaviors used to change the behavior of others and achieve organizational goals. The notion that power and influence can be based on personal or positional variables was used to design the framework of the present studies intended to describe how trait- and state-like variables are related to influence tactics and deinfluentization. The subjects were 250 Polish managers. Study 1 (n = 250) was undertaken to collect data about the influence tactics of Polish managers to fill the void in information in the field of social psychology in organizations. In Study 2 (n = 104) we correlated influence tactics with the personal sense of power. The results proved that the perception of having the ability to exert power over others was positively related to rational persuasion, apprising, and pressure. In Study 3 (n = 69) we investigated the relationships of influence tactics and deinfluentization with the Big Five and directiveness. The results showed that Neuroticism was positively correlated with pressure, legitimating, and coalition, but negatively with rational persuasion and consultation. Extraversion was positively correlated with rational persuasion, so was Conscientiousness. Agreeableness was negatively related to coalition. Directiveness was in a positive relation with pressure but correlated negatively with personal appeals. Deinfluentization positively correlated with Agreeableness and negatively with directiveness.