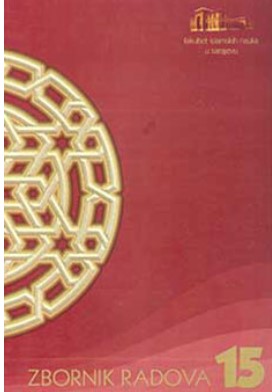 Summary/Abstract: The paper deals with the influence of Islamic sources on the idea and structure of Dante's Divine Comedy, the greatest literary work of the Christian Middle Ages. This paper presents the scientific discoveries of a Spanish orientalist Miguel Asin Palacios who in 1919 presented thesis which, and in a very detailed and on facts based method, proved similarities not only in general draft, but also in numerous details between Divine Comedy and several versions of the narrations about the Prophet's Mi'raj and Mi'rajes of Sufis, especially Ibn 'Arabi.

POČECI ŠTAMPE KOD MUSLIMANA I NAJSTARIJE ŠTAMPANE KNJIGE U BIBLIOTECI FAKULTETA ISLAMSKIH NAUKA U SARAJEVU BEGINNING OF PRINTING IN BOSNIA AND THE OLDEST PRINTED BOOKS IN THE LIBRARY OF THE FACULTY OF ISLAMIC STUDIES IN SARAJEVO 2010
2021 © CEEOL. ALL Rights Reserved. Privacy Policy | Terms & Conditions of use
ICB - InterConsult Bulgaria ver.1.7.1201