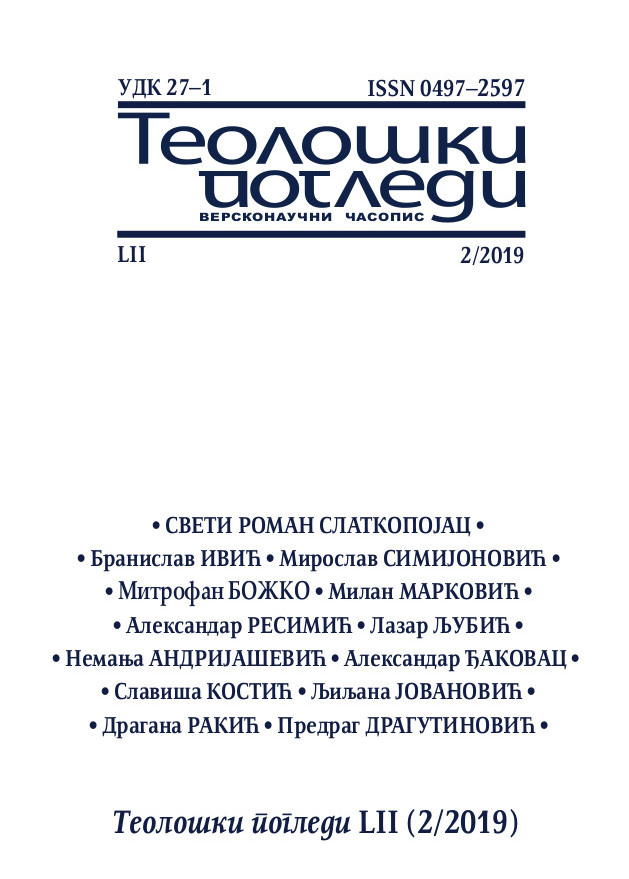 Summary/Abstract: Intercession, as a liturgical form, is in the Church since its beginnings. In fact, intercession was an integral part of the Old Testament worship. This is an ancient form taken over by the Church along with synagogue worship. Observing the historical development of the Liturgy, we see that intercession, as a prayer form, had its own creating process. Initially, when there were two worship services associated with the Eucharist, intercession appeared in the form of the dismission of the catechumen and the prayerful intercession. The dismission of catechumen and intercession are at synaxis from the earliest times, when this form was taken from the synagogue. The dismission of the catechumen is, on one hand, their connection with the Church, and on the other hand, intercession in front of God. The care about orphans is the basic activity of the ancient Church, which was in the ancient Judaism. With this care, the connection with the Church is realized in the form of taking Communion. It is certainly a theological basis for the Intercessio. This practical representation of the Church was extremely prominent until the time of Tertullian. Until then, it is mentioned as inseparable from the worship of the synaxis. The first form of intercession is the intercession of the living and the needy. With Cyprian of Cartage, we meet the memorial of Church members by name. He brings to us the mention of the martyr on the day of their suffering. In this way, a saint’s celebration calendar is formed. This is the first time the Intercessio appears. Cyprian also testifies to the mentioning of the bishop. The memory of the emperor in the Eucharist is first given to us by Ambrose. We can conclude that mentioning the bishop and emperor was common. From the time of Augustine, this practice has been established and was increasingly expanded. In the 8th century, the representation in the anaphoric prayer was fixed and divided into two parts – at the beginning and at the end of Anaphora. At Ambrose, the synaxis and the Eucharist came together on Sunday, while in the time of Gregory the Great this practice was established. The worship of the Lord’s Supper has slowly disappeared as a liturgical form. It is certain that one of the sources of intercession in the Eucharist is the worship of the Lord’s Supper, whose main character was intercessive. With Gregory, Litany appears as a prayer form of the Church. The merging of the Eucharistic sacrifice and synaxis slowly, more and more, caused the dismissing of catechumen and faithful, as well as intercession, from synaxis. The liturgy contains the remains of Litany. Since this form was very briefly kept in the Roman Liturgy, and the intercession from the beginning part disappeared, the shortened form of this prayer form remained as a witness of practice of intercession in the early part of the Liturgy. Intercessio is not a natural integral part of the Eucharistic prayer. It seems as if it breaks the unity of the offering and its grateful character. The liturgy seems to have become self-sufficient, and the mediating and advocacy role of the Church seems to have been forgotten. The Eucharist gradually became the place of the self-meaningful Intercession. Once a crown, which with its iconic eschatological character pointed to fulfilment and giving meaning to all other worships, and thus to synaxis and the Lord’s Supper, now fully took over their prayer form and incorporated it into itself. In this way, on one hand, it became self-sufficient, while, on the other hand, it explicitly pointed to the fulfilment of the sense of intercession, precisely in it. Intercessio remained the only witness of this role of the Church. Its place, in an anaphora, shows the sense of representation in the Communion, which was earlier and practically demonstrated.