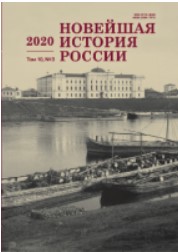 Summary/Abstract: This article presents a study of daily life of the Soviet elite, the leading people of the Leningrad City Council (P. F. Ladanov, N. I. Smirnov) and the Leningrad Regional Council (I. P. Petrov, V. N. Ponomarev, G. I. Vorobyov) in 1950–1956. A historical analysis of emotions makes it possible to rethink the era by answering such questions as: Whom the Soviet elite did love, and whom did they fear during the period of late Stalinism and the beginning of the “Khrushchev thaw”? What was the official behavior of a state leader? How and under what circumstances did non-politicized emotions arise? The study is based on sources of a personal origin: materials of official speeches, published and unpublished reports, materials of personnel files (including autobiographies), photo documents and sound documents, and memoirs of contemporaries. Additionally, office documents (transcripts of meetings, plenums, meetings, council sessions) deposited in the archives of St. Petersburg and Moscow associated with the activities of local government in Leningrad and the oblast were studied. The period 1950–1956 was when new, loyal managers were appointed to “empty” posts after the Leningrad Affair. One of the main tasks that confronted them in the first period was completing work on identifying “anti-party” elements in their ranks. In the leadership structures there was an atmosphere of suspicion and denunciation. Finally, tracing aspects of the transformation of these leading cadres at the beginning of the Thaw provides curious insights.