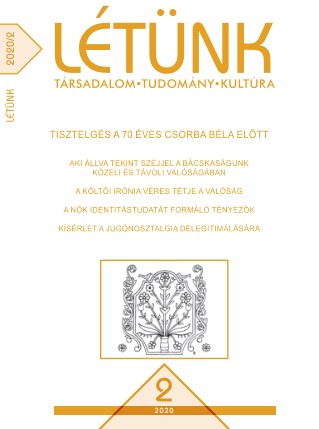 In memory of Sandor Balint, researcher of folk religion

Summary/Abstract: In his key piece on the national religion given in the three volumes of the Festive Calendar, Sandor Balint (1904–1980) paid little attention to the sacred tradition of present-day Vojvodina. The only exception is the ritual practice in the surroundings of Szeged. His first study of our area was published in the Catholic Review in 1942 among the sources of Catholic folk life in the South. Especially because of the inspiration given by the knowledge of medieval Hungarian piety, and at the same time the most inspiring source of Catholic rebirth in southern Bacska in the eighteenth century, which would like to highlight the role and influence of rural celebrations in organizing the community." In his work, Balint focused most on rural celebrations and pilgrimages, as he did in his second, slightly shorter dissertation, entitled Bacska Shrines which deals only with material from Bacska and appeared in the April 1943 issue of Kalangya. In this article, Sandor Balint really deals only with the theme of rural celebrations in Bacska and a brief history of pilgrimage sites mostly with Vodice in the north of Bacska, less frequently with Doroszlo, and he barely even mentions Bacs, as well as Ruski Krstur which is the pilgrimage site of Greek Orthodox Vojvodina, and he only mentions Srem in relation to the chapel of the Snow Blessed Virgin in Tekia. There is no mention of the miraculous water in Bunarić near Subotica. However, in the Holiday Calendar of our researcher we can find other notes concerning the territory of present-day Vojvodina.