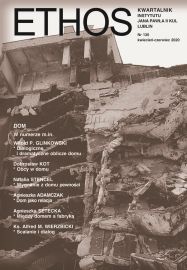 Summary/Abstract: Attempts at describing the phenomenon of home are so numerous that any claim to originality in this matter would be naïve. However, one can, and should, continuously rework constitutive elements of the well-known narratives of home. The elements in question include metaphors and the classical texts in which the metaphors are used. One of the key metaphors is that of a map conceived both as a scheme of where the home is located in space in the literal sense and as a basis for a more abstract relations, such as oppositions between mine and not mine, familiar and alien, oikos and polis or private and public. In another sense, the topography of texts addressing the theme of home may also be described as a map. The authors endeavour to identify the limitations of the metaphor of a map understood in the latter way and to defi ne selected problems implied by these limitations.