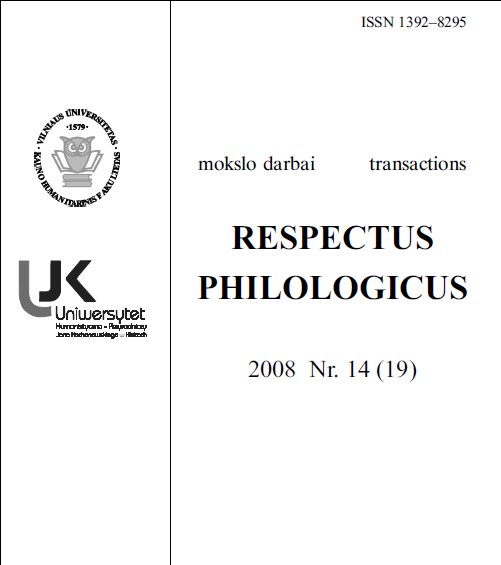 Summary/Abstract: The article analyses the process of creation and transformation of Herkus Mantas, the leader of Prussian uprising, one of the most prominent characters in the Baltic tribe history and its representation in the tragedy Herkus Mantas by Juozas Gruðas (1957) and the film under the same title by M. Giedrys (1972). The article analyses media structures of Herkus Mantas character providing that visual arts in the Soviet culture were considered to be more massive as compared to verbal, contrary to Western tradition, which does not recognize visual images (“pictures”) as arguments. This aspect of the Soviet theory of public perception may seem confusing, because the word in official Soviet ideology was always “primary”, which means more important, privileged, or primary in development, as well as a base for other more complex systems. If primary means the first or the most important, then secondary in a more common usage would naturally mean the systems that are of lesser importance, rather than the global systems designated by the Soviets. In this use, other types of specialized systems dependent upon language, such as writing as well as myth and religion, would be referred to as secondary. The article also analyses transformations that have occurred in the behavior of the character due to the changed dominant trends in the 1970-ties in the Soviet Lithuania. Some of the tracked changes are dependant on media (text/image) paradigms, which belong to theoretical accounts of “pictorial turn”, “turn to the visual“ or “foregrounding of the visual”. In the article, these accounts are shown as clusters of two groups: stories of the falling between words and images leading to the subordination of images to texts and closely related stories about the rise of images to the role of a new universal medium or, alternatively, to the emergence of a new integration of image, text or visual language. After the analysis of the text and image, it became clear that the character of Herkus Mantas depicted in M. Giedrys film is more active, less reflective which could be related to the general Soviet cultural trends in the 60-ties and 70-ties.