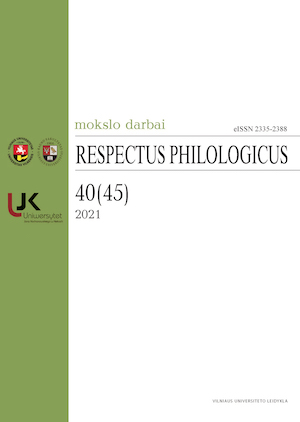 First issue of the journal is published in 1998 as the philological edition of Kaunas Faculty of Humanities, Vilnius University. In 2002 the international editorial board which includes leading scientists of Lithuania, Latvia, Estonia, Poland, Russia and Belarus is created. The journal becomes the international edition of regional character and is published with double numbering 1 (6). In 2004 Vilnius University Faculty of Humanities in Kaunas has been joined by Holly Cross Academy n. a. Jan Kochanovski, which is situated in one of the oldest towns of Poland in Kielce. Polish scholars have united with the colleagues from Lithuania to support the journal whose interdisciplinary approach and orientation at strengthening the cooperation among scholars of the humanities from different countries have gained acknowledgement in Lithuania, Poland, Russia, Belarus, the USA, Ukraine.and Finland. The journal becomes popular not only locally, but also involves authors from the USA, the Great Britain, Canada, Kazakhstan, Ukraine. Polish language among Lithuanian, Russian and English has become the fourth main language of the journal. The focalization of the journal is conduced to closer cooperation on its pages all scholars (linguists, literary critics, philosophers, sociologists, psychologists, historians and anthropologists, etc.) who are interested in different facets of and different language units with world and its place in the life of language community. The Editorial Board hopes that the dialogue among the scholars of different trends in the humanities will continue. Contemporary humanitarian sciences are applied to a large degree at present than ever. Their applied nature is manifested in the study of man as well since the main task of any humanitarian science is the cognition of humans. In this connection, linguistics begins to play a very important and specific role for it provides a direct access to human nature: it reveals humans through their language and verbal texts they produce. At the same time the role of interdisciplinary studies also increases as humans in the language context cannot be analysed within the framework of only one academic discipline. Thus the journal is supposed to be not only regional but also of interdisciplinary character with linguistics integrating different disciplines. The leading trend is supposed to be the analysis of different discursive practices. Consequently, the journal mainly concentrates on: Cognitive analysis of discourses (fiction, political, scientific, etc.) Cognitive strategies of translation Rhetorical problems of communication Semiotic analysis of a text Analysis of political, social and cultural phenomena in different social environments We look forward to cooperation with scholars of different trends in the humanities, who satisfy the requirements of contemporary science.